SORRY TO BOTHER YOU Doesn't Stick to the Script 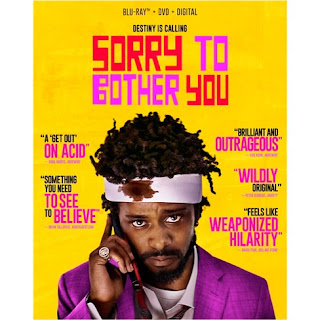 Sorry to Bother You is full of surprises, never once unfolding like we expect it to. That alone keeps it at-least interesting, whether you end up liking the film or not (I suspect many viewers definitely won't). That it's also wickedly funny, completely original and features a charming, relatable protagonist makes it one of the best films of the year.

I know from personal experience that telemarketing is a shitty way to make a living, so I empathized with Cassius Green (Lakeith Stanfield) almost immediately. Living in his uncle's garage and desperate for cash, he lands a job at RegalView, a telemarketing company that pretty-much hires anybody who walks in the door. And why not? Telemarketers aren't paid unless they make make sales. Despite rallying staff pep-talks by overly enthusiastic managers - "Stick to the script!" - telemarketing appears to be yet-another job he sucks at.

All that changes when co-worker Langston (Danny Glover) shows him how to use his "white voice." In almost no time, he's the star of the office and promoted to be one of the company's Power Callers, who make huge deals with mega-corporations. I knew guys like this during my brief tenure as a telemarketer. They were usually the most overbearing assholes in the room. Cassius' sudden success soon alienates those close to him, including co-workers Salvador (Jermaine Fowler) and Squeeze (Steven Yeun), who lead a strike against RegalView over unlivable wages.

Meanwhile, people everywhere are protesting WorryFree, a corporation that provides slave labor - working for basic necessities, but no wages - to other companies. When Cassius crosses the RegalView picket line, he becomes a national punchline when struck by a soda can. Still, he's aggressively courted by obnoxious WorryFree founder Steve Lift to come work for him. It's when Cassius learns how Lift wants to use him that Sorry to Bother You takes one of the most unexpected narrative turns I've ever seen, resulting in a final act that's completely bonkers...in the best way possible.

Not that the film wasn't already a little strange up to that point. Taking place in what can be described as an alternate universe, Sorry to Bother You presents a slightly dystopian society where laborers are commodities who are easily placated by mundane rewards and idiotic entertainment. The film itself is quirky and occasionally surreal, with a sense of humor that sometimes reminded me of  Idiocracy filtered through Wes Anderson. Along the way, writer/director Boots Riley aims satiric daggers at a variety of targets. And most of the time, he hits bullseyes.

But all the self-assured cleverness in the world would mean nothing without engaging characters. As Cassius, Lakeith Stanfield is note-perfect, displaying a vulnerable likability, perplexed by his circumstances while simultaneously going with the flow...for awhile, anyway. Tessa Thompson is also effective as Detroit, his activist girlfriend who serves as his moral compass. Most of the secondary characters and antagonists are painted in broader strokes, but amusing nevertheless (Armie Hammer is an absolute riot). Certain characters' "white voices" are hilariously rendered by a variety of well-known actors and comedians.

Despite RegalView's company mantra, Sorry to Bother You definitely does not "stick to the script." The result is a unique, offbeat satire that's destined to polarize audiences for years to come. Those not on-board with its concept and ideas will want to get off this train before the first Equisapien even shows up. Everyone else will want to revisit the film again and again. This is an outstanding great directorial debut and I look forward to Boots Riley's next.

MEE-OW! LIKE TAUNTING A MOUSE TO DEATH
Posted by D.M. Anderson at 8:55 PM