THE CYCLOPS and the Notorious B.I.G. 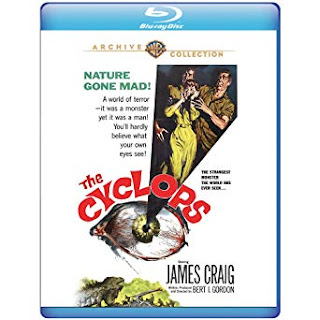 Bert I. Gordon may not have been what many would consider a great filmmaker, nor did he ever graduate from the type of B-movie drive-in fodder of which he was synonymous. But I'd be willing to bet the man had more fun making his movies than the typical auteur.

Gordon's heyday was during the 1950, cranking out budget-conscious sci-fi/horror flicks with concepts indicative of his initials. He directed, wrote, produced and even created a lot of his own special effects. One of his earliest efforts, The Cyclops, established a style and work ethic that he'd more-or-less adhere to throughout his career. From a visual effects standpoint, there's little to differentiate this one from his final film of behemoth beasts, 1977's Empire of the Ants.

As no-frills fear-fests go, The Cyclops is enjoyable and amusing, often at its own expense. Susan Winter (Gloria Talbott) puts together a small group to search for her husband, Bruce, whose plane disappeared in an irradiated region of desert a few years earlier. Of course, they run into a variety of equally-irradiated critters the size of city buses. Poor Bruce is out there, too, now a disfigured, one-eyed giant running around in a loincloth.

The visuals probably weren't convincing even in the 50s, but they serve what little plot there is just fine. But the best part of the film involves no special effects at all: Lon Chaney as Marty, a greedy prospector in search of uranium who basically exists to repeatedly put everyone's lives in jeopardy. At one point, his character punches their charter pilot during the flight, knocking him out and nearly causing the plane to crash. In the very next scene, everyone - including the pilot - acts as though nothing happened. Ya gotta love that.

While it's doubtful anybody would mistake The Cyclops for a good movie, one has to appreciate what the notorious Bert I. Gordon and friends were able to do with such a tiny budget while still putting-up with Chaney, who was allegedly drunk most of the time. Every mini-mogul had to start somewhere, and it was ultimately this tacky treat which led to bigger things (no pun intended), like Beginning of the End, The Amazing Colossal Man and Gordon's groovy Gortner-fest, The Food of the Gods.

This Blu-ray from Warner Archive Collection is sadly lacking in bonus features, but the film itself has been given a great Blu-ray transfer.