BELIEVER and Some Payback for the Pooch 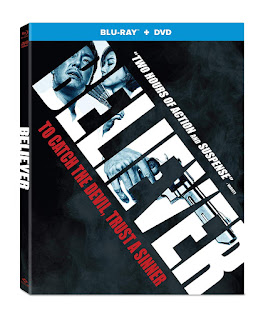 Mr. Lee is Korea's most notorious druglord, as well as its most elusive. In fact, nobody even seems to know what he looks like, and those who have seen him don't live long enough to talk about it. As for lower-level crime bosses who pose as Lee to elevate their own status...well, they aren't too long for this world either. Won-ho (Cho Jin-woong) is a detective who's been obsessed with catching Mr. Lee for years, but has never come close.

Won-ho sees another opportunity when an explosion at one of Mr. Lee's warehouses leaves a survivor, Rak (Ryu Jun-yeoi), and his dog. Rak seems less upset that his mother perished in the explosion than the wounds suffered by the dog, so he agrees to help Won-ho get inside the organization. In the film's best sequence, Won-ho poses as a buyer to meet psychotic Chinese dealer Ha-rim (Kim Joo-hyuk) in a hotel, then goes to the next floor and poses as Ha-rim to make a deal with another henchman who works for Lee. The whole segment is tension-filled and masterfully performed.

Elsewhere, Believer is content to be a your standard obsessed-cop-vs.-elusive-criminal caper, with enough narrative and stylistic flourishes to keep it engaging. Won-ho and Rak are interesting characters, but few of the others really rise above standard tropes: the dedicated team, the green rookie, the cruel henchman, the depraved kingpin (though a pair of loony chemists deserve their own movie). Storywise, the revelation of Mr. Lee's identity probably won't be a big shock to anyone who's seen The Usual Suspects, though the film does end with a memorable - and wonderfully ambiguous - resolution.

Other than the denouement, there aren't a lot of surprises and most of the big action is regulated to the final act. Still, Believer is stylishly made, the performances are good and I admit getting some perverse pleasure from a scene involving the brutal torture of one particularly hateful character. That's what he gets for maiming the dog!