BUYBUST: A Case of Deja Boom 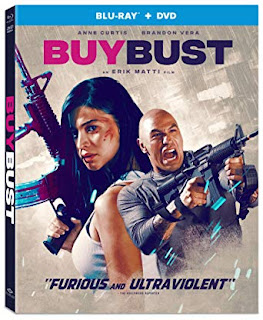 Based on an informant's tip, an elite squad of narcotics cops infiltrates Gracia, a crime-laden district in the Philippine city of Malate. Hoping to finally nab notorious druglord Biggie Chen (Arjo Atayde), instead they are double-crossed by a crooked agent and find themselves surrounded by countless thugs. Making matters worse...this grungy district, a labyrinthine maze of shacks and alleys, is mostly closed-off to the surrounding community. Now the team must fight their way out, a mission made more difficult by the community itself, most of whom have had enough of this ongoing drug war and commence attacking both sides.

After a prolonged set-up, the rest of BuyBust chronicles the team's attempts to escape against almost insurmountable odds. Aside from new recruit Nina (Anne Curtis), whose troubled past makes her sort-of interesting, there isn't much depth to any of these characters. They're simply here to shoot, fight and serve as cannon fodder. The villains are all equally disposable, though Levi Ignacio has a few impressively-vicious moments as head-thug Chongki.

What BuyBust has in abundance is action and violence. Highly reminiscent of 2011's The Raid, the film is a non-stop barrage of guns, knives, chases, bloody beat-downs and snapped limbs. Like players in a video game, most characters sustain multiple wounds before finally staying down for good. Viewers who value quantity over quality will find a lot to like here, since the mayhem is brutal, well-executed and features a few lengthy, unbroken fight sequences (such as an impressive rooftop brawl pitting Nina against a few dozen bad guys).

But unlike The Raid, which was continuously inventive, repetition sets-in after awhile. Unless a major character dies, there's little to distinguish one alley chase or close-quarters clash from another, not helped by hyperactive editing and over-reliance on shaky-cam. At 127 minutes, the film stops just short of being an endurance test.

Hard core action fans probably won't have too many complaints, though. As a visceral exercise in flamboyant filmmaking, BuyBust certainly delivers. But aside from some fleeting commentary near the end about the current state of The Philippines' ongoing drug war, don't expect much depth.