THE OFFICIAL STORY: A Devastating Dilemma 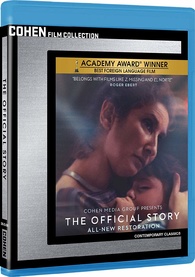 Imagine being unable to have children of your own, so you adopt a baby. For five years, you love, spoil and protect her like any good parent would. For all intents and purposes, she's yours and you never questioned the legitimacy of the adoption. Now imagine coming upon the slow realization that the girl's birth mother may not have given her up willingly, perhaps even murdered after the child was taken away. As a mother, how far would you go to learn the truth? Would you even want to know the truth?

That's the harrowing quandary presented by The Official Story, which won the 1985 Oscar for Best Foreign Language Film. It also won or was nominated for a slew of other awards, all listed prior to the opening titles of this restoration from Cohen Media Group.

It's 1983, near the end of Argentina's military dictatorship. The country is essentially divided between elitists who support the regime, and liberal protesters, many of whom suspect the government has tortured and murdered thousands that were deemed subversive. Alicia (Norma Aleandro) leads a seemingly idyllic life, married to government official Roberto (Hector Alterio) while teaching history at the local high school. Together, they spoil their adopted daughter, Gaby.

That begins to change when an old friend, Ana (Chunchuna Villafane), returns from exile, who horrifies Alicia with stories of being tortured because she was living with a subversive, as well as other women whose babies were taken and sold to wealthy couples. Alicia asks Roberto for details about their own adoption, but he's dismissive of her concerns. Meanwhile, some of the more rebellious students and staff at school have her questioning not only possible government atrocities, but Roberto's involvement in them. Later, while searching for birth records, she meets Sara, who reveals her own daughter was kidnapped and Gaby may very well be her granddaughter. A scene where she shows Alicia her only remaining family photos is truly heartbreaking (for Alicia and the audience).

The Official Story is a slow-burning film that's part family drama, part social commentary, part political thriller. Raising questions that neither we nor Alicia necessarily want answers to, the film grows increasingly unnerving, culminating in a devastating final act. We find ourselves questioning what we would do in the same situation, especially since the ramifications of learning the truth are potentially life-altering. Perfect performances by Aleandro and Alterio underscore the tragic effects on their marriage as it threatens to disintegrate.

While never overtly disturbing or suspenseful in the traditional sense - the film is pretty slow-going at times - it's ultimately engaging because the viewer can't help but put themselves in Alicia's shoes. The empathy we've developed for her renders the climax and resolution particularly distressing.

Considering some current events that have caused similar societal divisions in the United States, The Official Story might be more timely than we'd like to think. Not a cheery thought, but this isn't a film intended to entertain. It's barely-disguised commentary masquerading as a personal drama. By bringing the effects of atrocity to a home that one thinks would be unscathed by it, we ultimately realize none of us are immune.