Blu-Ray Review: WAR ON EVERYONE 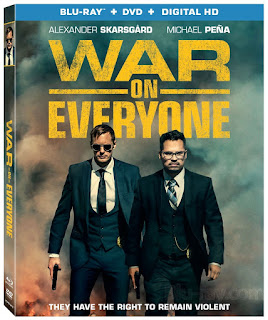 Watching War on Everyone, I am reminded how great Michael Pena is. Though not often a leading man, he sure manages to steal a lot of scenes from his bigger co-stars. He's also pretty damn funny while never appearing to be trying too hard.

He's easily the best part of War on Everyone, a hit or miss black comedy about two unscrupulous, crooked cops who supplement their income by extorting most of the criminals they're pursuing. Pena plays Detective Bob Bolano, who, along with his partner, Terry Monroe (Alexander Skarsgard), learn of a racetrack robbery planned by wealthy playboy "Lord" James Mangen (Theo James). But they find themselves in over their heads because Mangen is ruthless, violent and unafraid to kill anyone who crosses him.

The plot is mostly a springboard for these two cops to engage in a variety of bad behavior. They harass suspects, cause a lot of gratuitous destruction, snort coke & drink on the job and, of course, are indifferent to the threats of their frustrated captain (Paul Reiser, in a thankless role). Sometimes the film is clever and funny, other times obnoxious and gratuitously stupid. As is typical for films like this, there's an ensemble of supporting characters whose only purpose is to behave like oddballs.

Monroe's blustery, belligerent behavior grows especially tiresome after awhile, and unfortunately, he gets more screen time than Bolano. That's too bad because Pena is absolutely wonderful in the role. He's effortlessly amusing, even when forced to occasionally deliver some asinine dialogue. It's his numerous throw-away lines and reactions that provide most of the movie's laughs.

Elsewhere, War on Everyone works in fits and starts, wavering - sometimes uncomfortably - between dark humor and Will Farrell-style overkill. Ultimately, the film is probably amusing enough to make it worth a watch, especially with Michael Pena in fine form.

EXTRA KIBBLES
FEATURETTE: "Everyone Sounds Off: The Quirky Cast of War on Everyone"
DVD & DIGITAL COPIES