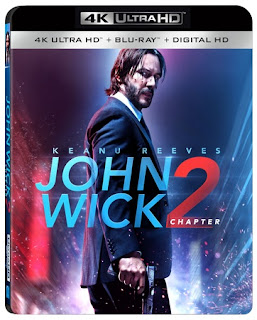 Keanu Reeves Returns as the Legendary Assassin in the Action-Packed Thrill Ride Arriving on Digital HD May 23 and on 4K Ultra HD Combo Pack, Blu-ray Combo Pack, and DVD on June 13 from Lionsgate.

Legendary hit man John Wick is forced out of retirement again by a former associate plotting to seize control of a shadowy international assassins’ guild. Bound by a blood oath to help him, John travels to Rome, where he squares off against some of the world’s deadliest killers.

The 4K Ultra HD, Blu-ray, and Digital HD releases feature over three hours of extensive bonus material including feature-length audio commentary with Keanu Reeves and director Chad Stahelski, three deleted scenes, nine featurettes, the official John Wick “Kill Count” video, and the Dog Wick short. Featurettes include “RetroWick: Exploring the Unexpected Success of John Wick,” featuring the cast discussing the success of the first film; “Training John Wick,” showing Keanu Reeves and Common training with guns, cars, and hand-to-hand combat; “Wick-vizzed,” which looks at the blueprint “pre-viz” of John Wick’s action beats; “As Above, so Below: The Underworld of John Wick,” exploring the assassin’s underworld in the movie; “Friends, Confidantes: The Keanu/Chad Partnership,” delving into the long-standing relationship between Keanu Reeves and one-time stunt coordinator – and now director – Chad Stahelski; “Car Fu Ride-Along,” where fans can experience a true ride-along with Keanu Reeves and the stunt driver; “Chamber Deck: Evolution of a Fight Scene,” breaking down one of the fight sequences from concept to screen; and “Wick’s Toolbox,” looking into John Wick’s bag of tricks. The 4K Ultra HD and Blu-ray versions will also feature Dolby Atmos audio remixed specifically for the home-theater environment, to place and move audio anywhere in the room, including overhead.

The DVD release features audio commentary with Keanu Reeves and director Chad Stahelski, and the featurettes “RetroWick: Exploring the Unexpected Success of John Wick” and “As Above, So Below: The Underworld of John Wick.” John Wick: Chapter 2 will be available on 4K Ultra HD Combo Pack, Blu-ray Combo Pack, and DVD for the suggested retail price of $42.99, $39.99, and $29.95, respectively.