CELL and the True Terror of Technology 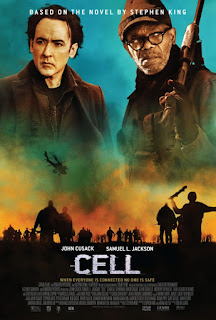 You do realize the zombie apocalypse has already begun, don't you? For all I know, you may already be one of them.

I don't own a cell phone. I used to have one, an old fashioned flip phone given to me for Christmas one year. I think I used it three or four times during the first few months before retiring it to my office drawer, where it stayed for several years. As someone who’s simply not important enough to be available 24/7 (none of us are), I’ve just never needed one. I still don’t.

While preparing to move not too long ago, we decided to purge much of the crap we'd collected over time, either donating it to Goodwill, recycling it or throwing it away. My phone ended up in one of those purge piles. My two daughters were somewhat amused when they saw this ancient artifact, which required the supreme physical effort of flipping it open and actually punching in a phone number. You couldn't use it to text or send emojis in lieu of actual words and sentences. Life was hell back in them olden days.

To this day, I refuse to carry a cell phone, arguably the worst thing to violate society since Fox News. That probably makes me sound like a cranky old curmudgeon who resents and fears advancing technology. Actually, nothing could be further from the truth. I depend on my computer, personally and professionally, on a daily basis. I love playing games and socializing on Twitter or Facebook with my iPad. I’m able to do 80% of all my holiday shopping in less time than takes to find a parking space at the mall. I haven’t written a physical check in over a decade because I pay my bills online. And like every other red blooded American male, I look forward to the day Debbie Does Dallas is adapted into a VR game. As someone who vaguely recalls the dark days before there was a microwave oven in every home, I'm reminded how wonderful it is to enjoy a piping hot burrito in only a minute or two and still complain about how long it takes. The ways modern technology has enhanced our lives is nearly boundless (though it has taken some of the fun out of buying records).


Cell phones, though? They haven’t enriched our lives in any meaningful way. They haven’t advanced us as a species or rendered us more intelligent. What they have done is alter our behavior. Computers and tablets are wonderful, but still essentially luxuries we could conceivably survive without. However, we’ve made cell phones extensions of ourselves like vital appendages. Many people feel as naked and helpless without one as leaving the house without pants. Cell phones have turned each of us into our own tiny island, oblivious to any part of the world that isn’t presented as text or a grinning turd. In public places where people congregate, you see legions of the Cellular Dead shuffle about like zombies in the Monroeville Mall as they tap, tweet and live life vicariously through a 3x5 screen.

With the possible exception of automobiles, cell phones are also responsible for more deaths than any other device not specifically built for the purpose of killing people. We’re so entranced by their power that we’ve walked off cliffs, stepped in front of trains and plowed into pedestrians during morning commutes. People have died in house fires, drowned in rivers and been crushed in trash compactors trying to rescue their phones. Wikipedia even has an entire page listing notable selfie-related deaths since 2013 (it numbers in the hundreds). Since humans have advanced to the point where we no longer have natural enemies and can cure once-fatal diseases with a quick inoculation, perhaps the cell phone is God’s last-ditch attempt at culling the herd.

But there's a more horrific depiction of the current zombie apocalypse brought on by the Cellular Dead. The only difference is we don’t return from the grave to feast on the living (though we certainly kill a shitload of 'em). That’s the basic concept of Cell, based on one of Stephen King’s better recent novels.


John Cusack is Clay, a comic book artist arriving at an airport. During the opening credits, nearly everyone around him is talking, texting or taking selfies. Like the undead, they shuffle about the terminal by the thousands, heads down and oblivious of others, all completely absorbed in their own activity. The only reason Clay himself isn’t among them is because his battery is dead. Then a malevolent cell phone signal suddenly turns everyone using one into violent maniacs. This long, bloody sequence is brutal and harrowing. Whether intentional or not, the fact this signal turns nearly everybody into monsters sends a strong message of how prolifically cell phones have insinuated themselves in our daily lives.

Clay manages to escape the mayhem, hooking up with Tom (Samuel L. Jackson), a former soldier turned subway engineer. Along with a few others (some who live, some who die), Clay heads off to try and save his son, whom he’s convinced has survived unaffected (though I'm not sure why). Meanwhile, those affected by the signal (“phoners”) begin to evolve. No longer mindlessly homicidal, they become something resembling Romeroesque zombies (you know...like real cell phone junkies look). They gather and travel en masse, behaving as a collective mind as if telepathically driven by some unknown force (though they’ll still occasionally pause their journey to slaughter any unaffected individual they run into).

The first thirty minutes of Cell are so intense that it’s a shame the rest of it plays like one of those Walking Dead episodes where the cast literally spends the entire episode walking. Secondary characters arrive often, only to die long before we learn much about them, though Stacy Keach appears in a memorable scene on a college campus, where the group douses thousands of sleeping phoners in gasoline before torching them to death. In addition, there are some impressive scenes showing the massive, migrating zombie hordes which remind me of every airport terminal I’ve ever visited.


But Cell is ultimately a missed opportunity. Despite my love for horror and much of Stephen King's work, none of it is really all that scary. What really would have been horrifying is if the entire opening airport slaughter was simply triggered by everyone's service simultaneously shutting off. No need for some mysterious signal to fry their brains because I've seen firsthand what losing service does to some poor bastards - including members of my own family. It turns them into monsters, screeching like pod people from Invasion of the Body Snatchers before going into a trancelike state, shuffling like mindless zombies, no longer in control of their own faculties because they're no longer connected.

It's how I imagine our population would probably react if their precious phones were simultaneously taken away. If the entire world was made up of junkies and all the heroin suddenly disappeared, it's highly unlikely they'd collectively shrug and sigh, "Oh well, it was fun while it lasted."

Who knows what atrocities the masses are capable of when denied something they seem to value as much as food & water? Would they fight amongst each other, or take out their rage on the few dozen hapless folks (including yours truly) who never succumbed to the cell phone's seductive siren song?

Not that's fucking scary.
Posted by D.M. Anderson at 6:46 PM