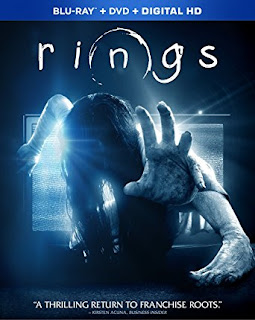 Seasoned horror fans might vividly recall the iconic scene in 2002's The Ring, when Noah Clay watches his TV in horror as malevolent child spirit Samara Morgan climbs from the well where she died, shuffles closer and closer, then crawls out through the screen. It was a memorable, chilling twist that arguably turned what could have been a standard ghost story into a modern American classic.

The Ring was also responsible for Hollywood's brief infatuation with adapting popular Japanese horror for American audiences. Some were pretty good - most were pointless - but The Ring remains the best of them by a wide margin. An inferior sequel, The Ring Two, immediately followed, of course. Like so many other horror franchises, the basic premise was really only effective the first time, meaning Samara, that perpetually damp emo child of our nightmares, joined such former luminaries as Michael Myers and Pinhead...horror villains whose power to scare diminishes with each sequel.

It seems odd to be getting another one 12 years later. Usually, horror sequels are made in quick succession to strike while the iron is hot and their primary audience - teenagers - still have a lot of discretionary income. But I suspect Rings isn't necessarily intended for fans of the original, but those weaned on such recent mallrat horror hits as Ouija and Lights Out.

In terms of quantity, Rings may offer more, but nothing really new. In the original, Samara was rarely actually seen, which made her big appearance during the climax especially terrifying. In Rings, Samara shows up early and often, popping out of a variety video screens (including cell phones...sign o' the times, I guess) to kill anyone dumb unfortunate enough to have watched the now-infamous videotape. In an opening scene that's both creatively exciting and narratively ridiculous, she takes-out an entire airliner because two of her victims happen to be on the same flight.

The song remains the same, of course: Anyone viewing the tape will die unless they personally make a copy for someone else to watch within seven days, which a college professor and some of his students foolishly do...on purpose. One of those kids is Holt (Alex Roe), whose girlfriend, Julia (Matilda Lutz), saves him in the nick of time by watching the tape herself. If that ain't love, I don't know what is. But what she sees is slightly different than the video that killed the others, prompting her and Holt to head to Samara's old stomping grounds to find out where she was buried 30 years ago.

It's at this point Rings turns more-or-less into a reboot of the first film, with Julia and Holt trying to solve the mystery. However, they aren't as interesting as Naomi Watts' character in the earlier films...more like two meddling kids in the Scooby-Doo gang, though Vincent D'Oonofrio arrives to liven things up a bit. If you're unfamiliar with the original, some of this is interesting, often pretty creepy, too. If nothing else, great effort was obviously put into giving Rings the same look and feel of the original. The same could be said for the fairly nifty - and suggestively apocalyptic - twist ending.

But that's only if the viewer is new to the franchise. For everyone else, more is definitely less, and there's nothing here that equals the dread of watching Samara climb from a television screen for the first time in the original. Not only that, since we're already aware of her nature, not even the ending provides any real surprises.

Rings isn't a bad film, and a strong argument can be made that it's an improvement on the second film. But as sequels go, it's completely unnecessary. However, if the premise is completely new to you, the movie kind-of works, and has enough obligatory jump scares to amuse those too young to recall the glory days of J-horror.