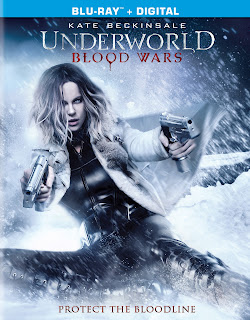 The original Underworld was a competently made, mildly entertaining horror-fantasy that, while successful, wasn't anything especially memorable. Aside from a sultry, leather-clad Kate Beckinsale defying gravity as she shot and sliced her way through legions of Lycans, there was little to distinguish it from similar CGI driven action-thrillers. Yet here we are,14 years later, with a fourth sequel, Underworld: Blood Wars, which probably prompted many of us to say, "Really? They're still making those?"

I never felt compelled to venture beyond the first film, even when the other sequels popped up on television, and if Blood Wars is any indication, I'm not alone. The film realizes the franchise isn't exactly the Star Wars saga, and wisely takes the time - through narration and flashbacks - to recap major events from previous installments that newbies need to know.

Beckinsale returns as Selene, a vampire Death Dealer, now an outcast (she once killed an elder who betrayed her) and hunted by both Lycans and the Eastern Coven. However, when the Lycans' powerful new leader, Marius (Tobias Menzies), poses a serious threat, council member Semira (Lara Pulver) suggests making peace with Selene so she can show Death Dealer trainees how to protect the coven. Semira also has secret nefarious plans to take control of the coven. Meanwhile, Marius is looking for Selene because her Lycan/vampire daughter's blood will make him invincible.

It's a lot of plot for an action movie and much of it is fairly predictable, therefore not too interesting. The same could be said for most of the characters. As Selene, Beckinsale still knows how to fill-out a leather jumpsuit and smolder, but her main ally, David (Theo James) isn't particularly dynamic and Marius makes a bland villain. On the other hand, Lara Pulver effectively exudes sexiness and cruelty in equal measures as Semira. There's an abundance of bloodletting and CG action, which I suppose is what we pay to see. Some of it is fun and engaging, though nothing you haven't seen before in countless other similar films, including the original Underworld.

By no means terrible, Underworld: Blood Wars is an unremarkable film that isn't apt to have much appeal beyond its core of existing fans. Undemanding newcomers may find it watchable, as it moves along briskly and doesn't overstay its welcome, but it's doubtful they'll wait with bated breath for Underworld 6.