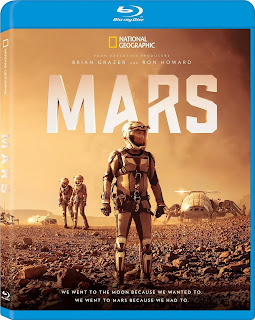 Mars is National Geographic's ambitious six-part miniseries that's part documentary, part speculative fiction which takes place in the years 2033 & 2037. While it's initially a mixed bag, things do improve as it goes along.

The story involves an international crew embarking on a privately funded journey to the Red Planet. The goal is to eventually establish a permanent, self-sustaining colony, a process expected to take several years. The endeavor is fraught with obstacles and complications, such as the physical effects of longterm space travel, creating a livable environment under severe Martian conditions and the psychological impact of living in relative isolation. For the most part, the crew is only one mechanical malfunction or screw-up away from certain death.

Interspersed throughout the story are interviews with present-day experts (including astronomy's resident rock star, Neil deGrasse Tyson) who discuss the feasibility of such a journey in real life. We also see ample footage of experiments conducted on and around Earth which might help prepare us for life on a hostile world. Incidents and dramatic turns in the plot are supported by evidence confirming their authenticity. And if nothing else, Mars is painstakingly detailed in its effort to present Martian life as realistically as possible.

Of course, being that this is a National Geographic production, the science is irrefutable and often quite fascinating. The series does a terrific job showing us that, not only would simply getting to Mars be a herculean task, actually living there would, for the most part, really suck.

However, what makes interesting science doesn't always translate into compelling drama. From a narrative standpoint, the first few episodes are almost too methodical in presenting the struggles of the crew, few of the whom are interesting enough characters to care about. Additionally, the frequent shifts back-and-forth from the story to present-day interviews are difficult to get used to.

But Mars improves dramatically, right around the time a months-long dust storm threatens the colony and a botanist starts to use his marbles. Similarly, when scientists discuss the psychological impact of extreme isolation on the human psyche, we develop a certain amount of admiration for anyone willing to subject themselves to it (such as astronaut Scott Kelly, who spent an entire year on the International Space Station). The show also finds a more consistent rhythm in segueing between reality and fiction.

With top-notch production design, mostly-convincing special effects and effective use of terrestrial locations, Mars is visually impressive; we seldom feel like we're watching actors on a soundstage. It takes awhile to get going, but while the story and characters pale in comparison to The Martian (and you will make such a comparison), Mars is a fairly enjoyable and informative miniseries. It also leaves the door open for another season (which National Geographic just recently announced).

EXTRA KIBBLES
MAKING MARS - A full length episode about the miniseries;
BEFORE MARS - A 30 minute prequel focusing on Hanna & Joon as teenagers
FEATURETTES:
"Getting to Mars," "Living on Mars" & "More Mars" - several promotional mini-docs (though not explicitly related to the show);
"Behind the Scenes" - A three-part featurette;
"Cast & Crew Interviews";
"Before Mars: Behind the Scenes"
DIGITAL COPY
KITTY CONSENSUS: