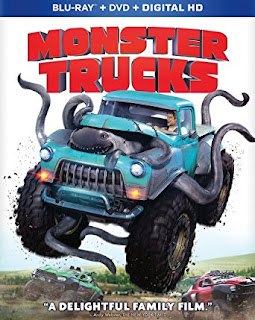 Somewhat famously, Monster Trucks - which cost $125 million - was actually completed nearly two years ago, its release date repeatedly pushed back until it finally saw the light of day in January, the month most movies are sent to die. By then, its studio, anticipating a massive flop, had already taken a writedown on the film months before it even reached theaters. Sure enough, Monster Trucks came and went virtually unnoticed.

Is it that bad? Not really.

Sure, Monster Trucks is narratively clumsy and filled with bland, cliched characters. And yeah, it looks like it was cynically produced with tie-in toys in-mind, pandering to undemanding kids infatuated with both monsters and trucks. One might even be offended by some of the blatant product placement on display (everyone drives a Dodge, watches TV channels owned by Viacom and drinks Big Red). The entire movie itself is more concept than creation, and probably deserved to play to empty auditoriums.

On the other hand, if you're in the right frame of mind (or a 10-year-old boy), Monster Trucks plays surprisingly well at home, where expectations are generally lower to begin with. Despite an utterly predictable story loaded with heavy-handed themes we've seen in countless other family films, it still manages to be sporadically charming. The two lead teen characters, Tripp & Meredith (Lucas Till & Jane Levy, who are obviously well into their 20's) may not be particularly dynamic, but they're likable enough to keep us rooting for them.

The premise, in which an evil oil executive (Rob Lowe) whose drilling accidentally unleashes giant mollusk-like creatures who feed on oil, is inherently ridiculous, but little kids aren't likely to care. They'll be too enthralled by Creech, a slimy-yet-cute critter who loves going fast by serving as the engine to Tripp's rusty old pick-up. Of course, the oil company wants to keep drilling, with plans to poison the ecosystem Creech came from, so they hire professional thug Burke (Holt McCallany) to capture Creech so they can keep it secret. Typical of films like this, it's up to the kids to save the day from the nasty, heartless adults.

Kids probably wouldn't have it any other way, which one needs to keep in-mind. Monster Trucks is unabashedly a children's movie and everything that entails. It's colorful and fast-moving, with interesting special effects and the type of silly humor that makes them giggle. There's also a considerable amount of vehicular action & destruction, and what Hot Wheels loving little boy isn't gonna love that? If nothing else, Monster Trucks is technically ambitious. Much of its considerable budget is obviously right up there on the screen.

Monster Trucks is ultimately a forgettable film, perhaps even irritating from an adult perspective. But if you have kids, it's inoffensive entertainment that's sure to amuse them a time or two. It's cynical, assembly-line filmmaking, to be sure, though not as bad as its reputation suggests.

NOT BAD...IF YOU HAVE KITTENS IN THE HOUSE
Posted by D.M. Anderson at 8:46 PM