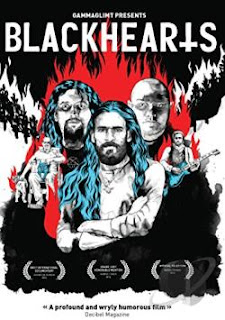 To call black metal on the fringe is an understatement. Unremittingly bleak, musically extreme and overtly satanic, it's a safe bet even most hardcore metal fans consider it unlistenable noise. The genre was born in the Norwegian underground over two decades ago, and for the most part, that is where it has stayed.

Still, while legends like Mayhem, Darkthrone and Gorgoroth aren't exactly household names, the genre's influence did manage to leak beyond its Nordic borders. Blackhearts is a fascinating documentary that focuses primarily on three black metal artists from various parts of the world, whose only dream is to travel to Norway and perform where their music would be most appreciated. We get to know them personally...life in their home countries, their influences and what the music means to them personally.

Of the three, Sina, a guitarist from Iran, is the most likable and charming. Forbidden from performing black metal in his home country, when he finally has the opportunity to play at a music festival in Norway (and meet a few of his idols), his awestruck sincerity is genuinely heartwarming, whether you're a fan of the genre or not. Then there's Hector, a family man from Colombia, who not only loves the genre, but has embraced Satan in his personal life; he and his band, Lucifarian, even sell their souls in a black ritual in order to afford the trip to Norway. Finally, we have Kaiadas, from Greece, who's a member of the alt-right political party, Golden Dawn, and gets arrested for criminal activities before the rest of his band heads north to perform at a festival.

We also meet a few of the "godfathers" of black metal, Nocturno Culto from Darkthrone and Arnt Gronbech from Keep of Kalessin, both of whom are more humble and down-to-Earth than the over-the-top, sinister image we typically associate with the genre. They are also philosophical about the role black metal plays in their own lives.

There are plenty of music performances. None of them are likely to create any converts, though one has to appreciate how technically - not-to-mention physically - demanding this music is. I also have to admit, though black metal isn't exactly my thing, Keep of Kalessin was intriguing enough for me to check out more of their music (turns out they're a damn good band).

It's a cliche for artists of virtually any genre to publicly announce "it's all about the music," which is easy to say when you're famous and raking in millions. But black metal artists already know they'll never be famous, never be millionaires, never accomplish more than preaching to the choir in dark caverns during Norwegian winters. For them, it really is all about the music, even if playing in a tiny room with six other happy headbangers. Whether they're veterans or hopefuls, their dedication to their craft is never in question. Even if one dismisses black metal as unintelligible noise, Blackhearts is an enlightening and entertaining look at a culture they probably know very little about.

EXTRA KIBBLES
FEATURETTES:
"It's All About Looking Good Onstage" - Obsidian C's workout regimen;
"He Fought a Bear and Lost" - Interview with Darkthrone's Nocturno Culto at 2015's Blastfest;
"White Metal Ministry" - Interview with a Colombian pastor and black metal musician; though the song remains the same, as they say, his message is different.
EXTENDED SCENE (of Hector's Satanic ritual)
2 MUSIC VIDEOS
TRAILER
KITTY CONSENSUS: