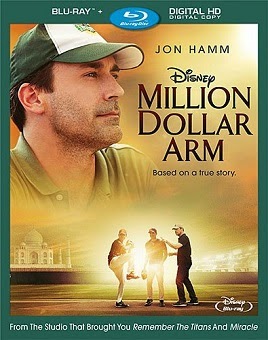 Disney may be mostly associated with animation, but they’ve also quietly developed a knack for cranking out family-friendly, inspirational sports flicks over the years. Mostly based by true stories, these films pretty-much follow the same formula: A hopeful athlete/team/coach defies all odds through sheer determination and self-reflection, followed by a moment of triumph in the final act, accompanied by soaring violins; cheers and tears of joy erupt from the audience; the end.

It’s a formula that works nearly every time because Disney has it down pat. After all, who doesn’t love a manipulative, inspirational sports movie? (If you know someone like this, you should find better friends).

This time, Jon Hamm is J.B. Bernstein, a self-centered, down-on-his-luck sports agent who comes up with the potentially career-saving idea of holding a pitching competition in India (where cricket is the most popular sport), and the two best will be given the opportunity to try-out for a Major League Baseball team in America. Two teens, Rinku & Dinesh (Suraj Sharma & Madhur Mittal), manage to win because of the their speed, even though they’d never previously played baseball and don’t actually like cricket. Bernstein brings them back to America and, because he’s in financial dire straits and has a time-sensitive deal a business investor (Tzi Ma), coaxes a respected pitching coach (Bill Paxton) into trying to prepare the two boys for a nationally publicized tryout as fast as possible…before they may even be ready.

Obviously, there’s some amusement in this clash of cultures scenario, as well as much soul searching by Bernstein, whose priorities are questioned by Brenda (Lake Bell), a med-student/guest house tenant/moral compass (and if you’re at-all surprised these two become romantically involved, you need to watch more movies).

Hamm does a decent job in the lead role (we kinda like him even when he’s being a douche), and Sharma & Mittal display the right amount of charm & naiveté to make us care about them. But it won’t come as any surprise Alan Arkin steals every scene he’s in as a cynical old baseball scout, so adept at his job that he knows a good pitch without even seeing it.

As formula pictures go, Million Dollar Arm does not reach the emotionally rousing heights of previous Disney sports flicks like Remember the Titans or Invincible. The somewhat leisurely pace (especially the first act) also tends to render this one a bit less compelling. But like Disney’s equally-amiable Cool Runnings, the fish-out-of-water scenario still works because we like these characters.

Plotwise, Million Dollar Arm offers nothing you haven’t seen before. It’s yet-another inspirational sports movie based on a true story. Depending on how cynical you are, that could be seen as a good or bad thing. Either way, you have to admit no one currently does this kind of thing better than Disney.