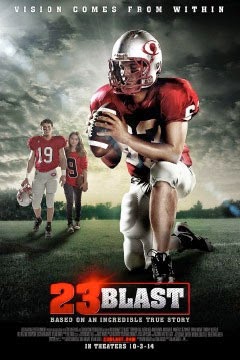 My dad would rather swallow glass than eat an onion. Whenever Mom cooks her famous chili (which Dad loves), onions are essential to the recipe, but she always keeps that bit of info to herself, and he never notices. But you can bet he’d sense something wrong with her latest batch if she suddenly left them out.

I love sports movies, even those centered around a game I don’t actually care for (like baseball). I’m also a sucker for those based on true events. Sure, liberties are often taken with the actual story for the sake of good drama, but I can live with that. Even true stories aren’t supposed to be documentaries.

However, I generally can't stand religious or faith-based movies. Not that I’m an atheist or anything, but the few I’ve endured have mostly been preachy, agenda-driven and heavy-handed. So it makes me wonder if someone like my mom had a hand in making 23 Blast.

This is yet-another true story, this time about Travis Freeman (Mark Hapka), a superstar on his high school football team who’s suddenly rendered permanently blind from an infectious disease. He initially gives up on everything, but with the encouragement of friends, family, his coach and a good bit of spirituality, Travis manages to get back on the playing field.

Despite the fact the movie is as predictable as the tide, milking every triumph-of-the-underdog trope under the sun, 23 Blast still manages to be pretty engaging. This is mostly due to congenial performances from of a cast of familiar character actors whose names always slip your mind (one of them, Dylan Baker, also directed the film). Other than Timothy Busfield, who tackles his role of a closed-minded sport-coordinator like he’s channeling the ghost of Boss Hogg, these characters are well-rounded and complex. Especially good are Stephen Lang as Coach Farris and Kim Zimmer as Travis’ somewhat overprotective mother. And for a relatively 'wholesome’ film, the teen characters are still realistic and believable.

Of course, faith is still the ultimate message, and we get a dose of it here. But those scenes are creatively interjected with enough subtlety that, if you weren’t actually looking for it, you may not even notice (yet this would be a lesser film without those revelatory moments).

The story itself consists of one sports cliché after another, but 23 Blast is far from the first film guilty of such a crime. As far as its message of faith goes, I didn’t mind the onions in the chili this time, because they blended well with other ingredients I never grow tired of. And God help me, 23 Blast would have been less tasty without them.