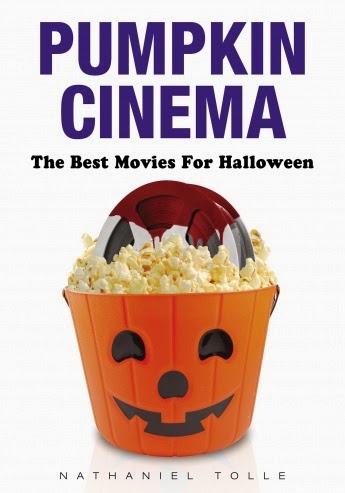 Author Nathaniel Tolle had me at Scarecrows, an obscure horror gem most folks have never heard of, and even fewer have seen. That it’s included among the hundreds of entries in Pumpkin Cinema shows the man has done his homework. It’s also indicative of the purpose of this book, which is not to be a definitive guide of the greatest horror films of all time (we have enough of those anyway), but to feature those which make perfect viewing (preferably in a roomful of friends) on the holiest of unholy holidays, Halloween.

Tolle lays out the criteria of what makes a good Halloween movie in the intro. First and foremost, it has to be fun, even if said-film is isn’t exactly a classic. It also has to be fairly fast-moving with a running time under two hours (Tolle makes a few exceptions to the rule with such classics as Dawn of the Dead and The Exorcist, films which don’t feel like they’re that long). The film can’t be mean-spirited or cruel, excluding the entire torture-porn genre (which, in my humble opinion, doesn’t really qualify as true horror anyway). Ultimately, it must feel like a Halloween-type movie and the season in which the holiday falls, even if it isn’t a true horror film (such as Hocus Pocus, Ghostbusters and The Witches).

So while the likes of Rosemary’s Baby, Jaws, Saw, The Descent and The Shining aren’t included, there’s a plethora of great recommendations…good & bad, classic & obscure, family-friendly & put-the-kids-to-bed-early. Sure, it’s all subjective, but Tolle also understands a lot of people read books like this for fun, and his style is wonderfully entertaining, even when I don’t always agree with him. Tolle is also incredibly knowledgeable of his subject. Few writers are able to tell me anything I don’t already know, but I truly had no idea Joe Dante was once the intended director of the much-maligned Halloween III.

Among the plethora of horror-related cinema books, Pumpkin Cinema is somewhat unique, serving as both a guide to Halloween fun and an informative volume which will please even die-hard fans of the genre (who probably don't need yet-another chapter over-praising The Shining). What I really appreciate is the author doesn’t come across as pompous or overly analytical, just an entertaining writer who truly knows his stuff. That alone makes this book worth owning.