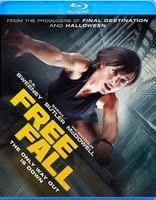 One only needs to look at the cast of this low-wattage suspense flick to know where it’s coming from. D.B. Sweeney was once one of those ‘next big things,’ whose career panned out to consist of recurring characters on TV shows and direct-to-video potboilers. Malcolm McDowell apparently accepts any role he’s offered, so long as they only take a few days to shoot. As for Sarah Butler, the actual star of Free Fall…well, she’s got great legs.

Butler plays Jane, an ambitious rising executive with the Gault Corporation (whose business is never made quite clear). After the alleged suicide of a co-worker, she discovers Gault himself (McDowell) has been embezzling money from his own company. While she’s working yet-another late night in the L.A. skyscraper that’s the company’s headquarters, Gault sends corporate assassin Frank (Sweeney) to silence her…permanently. Jane manages to escape (for a professional assassin, Frank’s a lousy shot), running into an elevator. While she’s descending, Frank cuts the power, trapping her mid-floor. The quandary is, while Jane may not be able to get away, Frank can’t get to her either.

Most of the film has Jane stuck in the elevator while Frank tries to find a way in. There’s relatively little actual onscreen action, and aside from a few secondary peripheral characters who really serve no narrative purpose, it’s essentially the Jane and Frank show.

Butler shows some spark and athleticism as Jane (especially during an introductory kickboxing scene, obvious foreshadowing for when she’s eventually forced to kick some ass). As for Frank…he has to be the dumbest individual ever hired by a sinister corporation to clean up their problems. Sweeney does what he can with the role, indulging in a bit of scenery-chewing with some cool arrogance, but his character’s boneheaded buffoonery leaves us thinking we could have taken care of Jane more effectively.

For a low budget film, Free Fall is technically competent, even managing to generate a fair bit of suspense at times. But the story is unnecessarily padded-out with plot holes, pointless secondary characters and a prolonged coda which seemingly exists to display Butler’s bikini-clad assets, long after everything has been resolved and the primary villain dispatched.

Ultimately, Free Fall might have been better off as a short subject, eschewing the peripheries to focus on the potentially awesome cat-and-mouse game this film’s premise doesn’t provide.