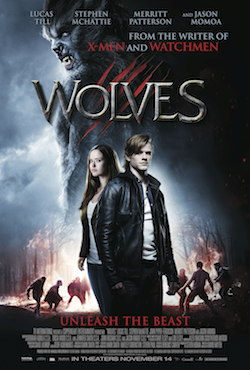 Let’s face it…onscreen werewolves haven’t been scary since…well, ever. Even the best modern films (The Howling & An American Werewolf in London) favored laughs over chills, and the most famous werewolf of the 21st Century is more renowned for his pecs & abs than his ferocity.

So it’s to writer/director David Hayter’s credit that he doesn’t try to re-invent the wheel with Wolves, a modest-but-entertaining film which will likely appeal more to older teens than longtime horror buffs…lots of hot guys, hot girls, a bit of sex and just enough bloody mayhem to distinguish it from the young-adult thrillers which typically pop up on the CW network.

Lucas Till is Cayden, star quarterback for his high school football team. He’s got a perfect life - nice home, loving family, smoking-hot girlfriend - until he discovers he’s also a werewolf after waking from a blackout to find his parents dead and mutilated. After going on the run, he meets Wild Joe, a fellow werewolf who directs him to Lupine Ridge, a small town where his kind have been living for centuries. He’s initially not welcome by the locals, especially Connor (Jason Mamoa), the leader of a pack of lycans who embrace their hunter-killer instincts.

Cayden befriends John (Stephen McHattie), an old man who gives him a job on his farm and provides most of the exposition needed to advance the story. It turns out Connor wants a child and has picked local bar owner Angelina (Merritt Patterson, who doesn‘t even look old enough to drink, let alone tend-bar) to give him one. Cayden doesn’t like this, partially because he’s smitten with Angelina, but also because Connor seems to take great pleasure in killing and eating his own kind (it's also revealed that Cayden & Connor have a much greater connection than simply being fellow wolves).

Wolves isn’t the least bit scary, nor does it really try to be. The story falls more into the realm of modern fantasy than true horror. The performances are adequate, each actor rendering their characters suitably likable or despicable. I suspect Momoa (he of Game of Thrones and soon-to-be-Aquaman fame) is a major drawing card, and since he has a lot of screen time, his fans won’t be let down.

The make-up effects are fairly impressive, though nothing truly horrific. Unlike the groundbreaking (and still hideous) transformation scenes in An American Werewolf in London, these wolves are elaborately detailed, but their overall fuzziness renders most of them more endearing than terrifying.

Still, despite its lack of scares and originality, Wolves is undemanding fun and moves at a brisk pace, only occasionally threatening to venture into Twilight/Teen Wolf territory before diving back into the bloody monster mayhem we actually paid to see. There’s nothing here that’ll knock your socks off, but it’s an entertaining enough film to warrant an hour-an-a-half of your attention.