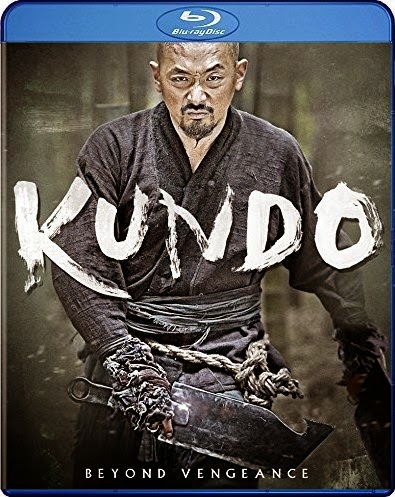 This South Korean variation of the Robin Hood legend is a tongue-in-cheek hodge-podge of martial arts action, sword play and Sergio Leone westerns. While not quite as awesome as such a mash-up implies, Kundo is pretty entertaining.

It’s 1859, and the Joseon Dynasty has oppressively ruled the region for decades. Keeping the corrupt government paid-off, they ruthlessly steal land and rice from local peasants. Jo Yoon (Kang Dong-won) is the sole heir to the dynasty (though an illegitimate son) now that his brother is dead. He rules with an iron fist while impatiently waiting for his father to die. When Jo Yoon discovers his brother’s widow is pregnant, he fears the child might be a boy and the rightful heir, so he hires lowly village butcher, Dolmuchi (Ha Jung-woo) to track her down and kill them both. But Dolmuchi is unable to go through with it, so Jo Yoon kills his mother and sister and leaves him for dead.

Dolumchi is eventually rescued by a clan of legendary bandits (the Kundo) who make a living stealing from the wealthy who abuse their power and giving the spoils to the poor. Within a few years, he becomes their most fearsome and notorious outlaw. Meanwhile, Jo Yoon’s tyranny is nearly out-of-control, and when word of this gets back to the Kundo, they decide to try and take back what he’s stripped from the locals punish all the crooked aristocrats involved. Dolmuchi sees this as his chance to avenge the slaughter of his family.

There are few interesting twists along the way; it turns out the widow had-since joined the Kundo and indeed gave birth to a son. Later, in a surprising - though ultimately unnecessary - revelation, Jo Yoon isn’t quite the man he seems.

Kundo features some impressive action, good performances (especially Dong-won, who looks like a live action anime drawing) and welcome doses of oddball humor. It’s visually impressive and the music score (obviously inspired by Ennio Morricone) is outstanding, which goes a long way in reminding us this isn’t really a period piece, but an homage. The same can be said about the dialogue, which is loaded with expletives and often laugh-out-loud funny, simply because we’re certain some of these terms weren’t part of 19th Century Korean vocabulary. One might even assume the director drew a bit of inspiration from Django Unchained.

However, the film is much longer than it needs to be, and sometimes takes dark turns which tend to undermine tongue-in-cheek tone established in other scenes. In addition, although Jung-woo is good in the lead, his character is supposed to be a late teen/young adult, yet he’s obviously twice that age. A small quip, to be sure, but noticeable nonetheless.

Still, Kundo is an entertaining enough way to kill a few hours, with enough sword & fist action to sate genre fans, and enough references to movies-past to please those who enjoy a well-directed homage. You won’t likely give the movie much thought afterwards, but it’s good while it lasts.