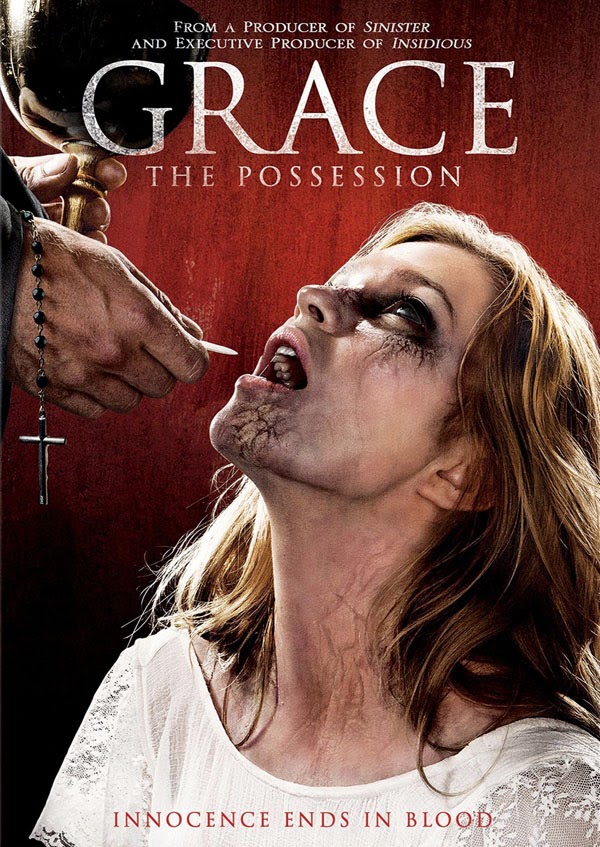 The problem with the demonic-possession subgenre is its built-in limitations. There’s only so much you can do with the concept, and The Exorcist did it perfectly over 40 years ago. Every film since, no matter how well-made, has simply rearranged, reimagined or regurgitated the same tropes over and over again. Sure, some enterprising filmmakers have attempted different spins on the material, such as spoofs, found-footage or those supposedly ‘based on a true story.’ But in the end, they’re just gimmicks used to tell the same old story…some poor rube becomes possessed, ominous warnings are either heeded or ignored, then the clergy arrive to mop things up.

Writer/director Jeff Chan tries a different gimmick as well. For his feature-length debut, he shoots Grace: The Possession almost exclusively from the point-of-view of the possessed. In this case, it’s Grace (Alexia Fast), a naïve teen who’s been raised by her zealously religious grandmother, Helen (Lin Shaye, deliciously hateful here). Grace tries to fit-in during her freshman year at college, which becomes increasingly difficult once a demon enters her body (and you thought sharing space with a roommate was tough).

As things go from bad to worse, Grace reluctantly ends up back home, subjected to grandma’s abuse and the stern condemnation of a perpetually stone-faced local priest (Alan Dale). Meanwhile, the demon within soon takes complete control of her (mostly depicted through scenes where Grace views herself in mirrors). It isn’t long before folks start dying and the inevitable exorcism takes place.

Chan at-least deserves some kudos for trying to put a unique spin on a well-worm formula, and there are moments when the film’s unique point-of-view actually works to build a bit of dread. But ultimately, it’s still a just gimmick which eventually negates the overall effectiveness of the film as a horror story. As an audience, we’re supposed to be Grace, but since the concept of possession is an internal battle, this is ultimately just fancy camerawork. Impressive, to be sure, but nothing which renders the story any more compelling than the hundreds of possession films which preceded it.

This may or may not be another strike against the movie, but some secondary characters are such awful people that I found myself rooting for this demon to kill them as violently and painfully as possible. In fact, Grace herself is pretty dull until these (unintentionally?) rousing moments. I identified with her more when she was possessed than the insecure waif depicted at the beginning. Does this make me a bad guy?

Grace: The Possession is far from the worst movie in this subgenre, but despite the conceit of its gimmick (one step removed from found footage), it offers nothing new. You’ve seen this movie before, many times. More than likely, it’ll mostly remind you of how groundbreaking The Exorcist really was.