STAR WARS EPISODE I: THE PHANTOM MENACE vs. Dale Earnhardt 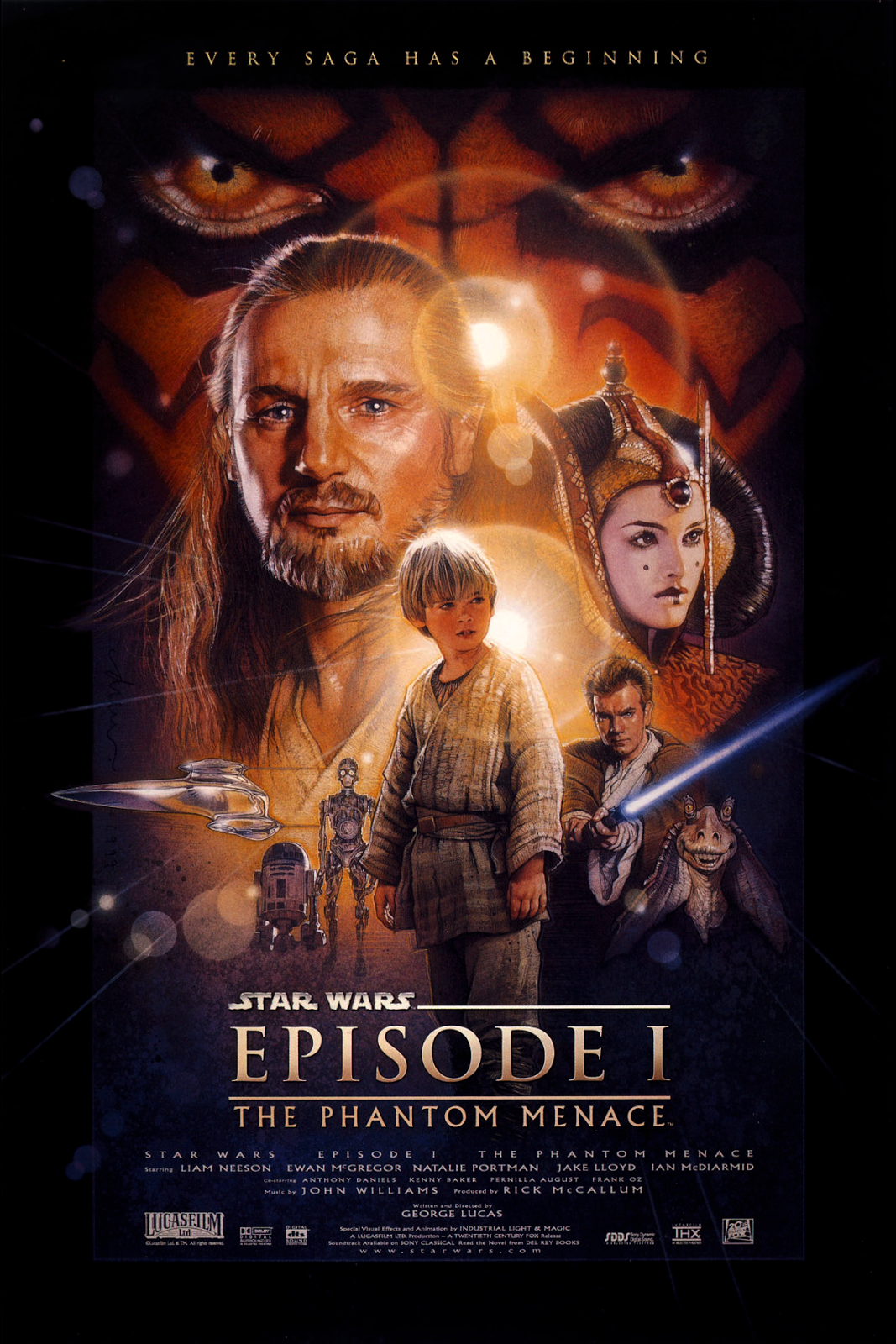 For a large part of my adult life, I’ve been a huge NASCAR fan. It started after I decided to go back to school for a teaching degree. There were countless weekends when I was saddled with trying to make sense out of old English literature, arguably the most fucked up canon of confounding crap ever created (and I hope Dante Alighieri is currently suffering eternity in the Ninth Circle of Hell he once wrote about so vividly).

I’ve always been one of those who can’t really study without background noise, and first tried having NFL games on the TV. It proved too distracting, however, probably because I dabbled in fantasy football at the time; constant score updates and big touchdown plays sucked my attention away from Chaucer every five minutes. How could I possibly slog through The Canterbury Tales while Jerry Rice was lighting up the scoreboard?

But NASCAR on ESPN? This was just 43 guys driving around in circles, with the occasional crash thrown in. Surely, the constant drone of stock car engines would provide the perfect background to Shakespeare’s sonnets. And for the most part, it worked. Aside from infrequent multi-car smash-ups, I was able to focus on the tasks at-hand. So maybe I have NASCAR to thank for eventually completing my degree.

But unconsciously, while I bullshitted my way through essays which praised Alexander Pope, I became quite familiar with NASCAR. It was more than a bunch of good ol’ boys driving in circles…weather and the quirks of various tracks affected how cars handled, which often changed as the races wore on. There was strategy in pit stops…two tires? Four tires? Do we have enough fuel to make it to the end? Do we play it safe but give-up track position, or go for it with worn tires and low fuel?

It often turned out that the winner wasn’t always the fastest driver, but the smartest, or at-least one skilled enough to use his car to punt someone else out of the way without wrecking himself.

And no one was more skilled than Dale Earnhardt.

As with any sport, the more you watch, the more you become familiar with its participants. By the time I actually landed a teaching position, I was totally into NASCAR and knew every driver. I had my favorites (such as Tony Stewart and Jeff Burton) and those I loved to hate, like Jeff Gordon (a California pretty boy who won all the time), but especially Dale Earnhardt, who was arguably was the sport’s dirtiest driver. Every weekend on race day, even when it was obvious none of my favorite drivers had a chance of winning, I could at-least revel in rooting against Earnhardt.

Despite his aw-shucks Southern demeanor in interviews, Earnhardt polarized NASCAR fans because, more than anyone else on the track, he would do whatever it took to win, fair or unfair. His fans were legion, as were his detractors. His image as ‘The Intimidator,’ with his black car and no-holds-barred racing style, was well-earned. There was never any grey area when it came to Dale Earnhardt. He was NASCAR’s Darth Vader…a figure to be feared, respected and despised all at the same time. His on-track actions created incredible drama.

When I heard the news, I broke down and cried. Despite my hatred of Earnhardt during races, he was immeasurably (and unarguably) important to the sport. I loved rooting against him the same way I loved rooting against Hans Gruber in Die Hard. Earnhardt was the ultimate NASCAR villain and I enjoyed his role immensely, a fact I didn’t appreciate until he was gone. Hence, his death left a gigantic hole in my heart.

NASCAR carried on, of course, but the absence of Earnhardt’s #3 Monte Carlo stalking the track was difficult to get used to, whether we liked the man or not. Jeff Gordon’s youthful popularity aside, Earnhardt was the face of NASCAR…he was its anti-hero, its centerpiece, its Darth Vader. For me, it would be years before another driver took his place as a true villain who brought much-needed spice back to the track (Kyle Busch, a spoiled brat whose brash cockiness makes me hate him even more than Dale). Because of the nature of the sport, NASCAR’s bad guys have historically been a vital part of its popularity, especially when the personalities & racing styles of such good guys as Matt Kenseth and Jimmy Johnson are as exciting as macaroni & cheese.

I felt the same way about Darth Vader’s death at the end of Return of the Jedi. And because the story made his demise inevitable, we were pretty certain this would be the end of the saga. Vader is one of the greatest movie villains of all time (if not the greatest). Even today, his is the first image which comes-to-mind whenever the subject of Star Wars comes up. By the end of Jedi, Darth Vader was the most dynamic, well-rounded character in the entire trilogy. Sure, Luke, Leia and Han emerged victorious, but there was nothing more poignant than Vader’s final sacrificial moment. Heroes are a dime a dozen, but truly memorable villains are a rare commodity, and aside from Psycho and the Hannibal Lector franchise, I can't think of too many films with a story more-driven by its primary villain than the original Star Wars trilogy. Any future film in the franchise without Darth Vader would be a shadow of its former self, much like the NASCAR races immediately following Earnhardt’s death.

And that’s exactly what happened...

Sure, all of us longtime fans were ecstatic when George Lucas announced a new prequel trilogy, chronicling Anakin Skywalker’s life from boyhood to his transformation into Darth Vader. Such a story was never really necessary, but we were simply blinded by the fact Lucas was bringing back Star Wars. It never occurred to any of us that Star Wars Episode I: The Phantom Menace, despite its stupid title, would be anything less than the greatest film of all time.

Of course, we all know the critical drubbing and public backlash The Phantom Menace received. Even if your expectations weren’t already raised to levels no film in history could possibly satisfy, this is a failure of a movie. Not because of the convoluted story, the over-reliance on CGI and the now-available-at-Toys-R-Us conceit of Jar Jar Binks, but because Lucas forgot to include the one thing which made the original trilogy crackle…a dynamic bad guy we love to hate.

Initial trailers and posters led us to believe the satanic-looking Darth Maul would be the baddest of badasses (who had the potential to be Star Wars’ Kyle Busch), but he’s just a henchman who only turns up for a few scenes before being killed-off as unceremoniously as Earnhardt losing a race because of a blown tire. After that, the only villains remaining are the Trade Federation, represented by a few guys who resemble petrified pond fish.

Sure, there’s a lot of other things wrong with The Phantom Menace, such as the terrible dialogue and some lazy performances, but even reflective fan boys have to admit the original trilogy wasn’t exactly brilliant in those departments either. And yeah, Jar-Jar is obnoxious, but so were the blatantly-cloying Ewoks in Return of the Jedi, but neither were so prominently-featured that they sank either movie. Lucas’ story is also confusing as hell, and he went absolutely batshit with the CGI (eschewing the charming grittiness of the original trilogy to make everything look like a the intro to a video game), but these problems wouldn’t have amounted to much if not for one thing…

What’s truly missing from The Phantom Menace is the menace. It’s a film loaded with Jimmy Johnsons and Jeff Gordons and occasionally cantankerous Tony Stewarts. But there’s no Dale Earnhardt, a creatively-dynamic, flamboyant & malevolent villain, perpetually lurking throughout the race, ready to spin-out the leader to be first across the finish line. Although Senator Palpatine (aka, Darth Sidious) is indeed the phantom menace of the title, crooked politicians make better villains in Law & Order episodes than space operas.

Let us hope J.J. Abrams remembers this.
Posted by D.M. Anderson at 4:01 PM