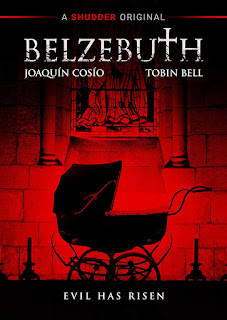 Be forewarned...nearly all of the victims in Belzebuth are children. And not a carload of dumb teenagers being punished for premarital sex. We're talking little kids. In fact, the opening scene features a demon-possessed woman who sneaks into a hospital nursery and slaughters all the newborns with a scalpel before slitting her own throat.

I only bring it up because some horror fans might have a problem with the film's copious kiddie carnage. Carve up all the hunky douchebags and nubile nymphs you like...just leave the toddlers alone...

No children are actually shown dying, so I guess its a tribute to Emilio Portes' directorial skill that the opening scene still feels brutal as hell (probably more-so if one is a parent, like yours truly). For better or worse, though, it's an unforgettable sequence that promises a relentlessly grim ride for viewers who are up to the challenge. While Belzebuth doesn't completely fulfill that promise, the film holds together long enough to be worth checking out.

If you've seen The Final Conflict (aka Omen III), you might recall the segment where Damien commands his disciples to kill every child born on a specific day in order to prevent Jesus from returning. That's the basic premise of Belzebuth. Joaquin Cosio stars as Emmanuel Ritter, a cop in Mexico whose son was one of the newborns killed in the nursery. When more children are mass-murdered, the FBI sends paranormal agent Ivan Franco (Tate Ellington) to aid in the investigation (I doubt the FBI actually has such a division, but we'll play along).

Spotted near every murder scene is Vasillo Canetti (Tobin Bell), a defrocked priest covered in inverted cross tattoos, who becomes their number one suspect. When it becomes apparent that one kid in particular is the target of these attacks, but has so-far been lucky enough to be somewhere else, it turns Canetti might actually be trying to save him.

Frequently disturbing without ever being all that scary, the first half of Belzebuth plays like a police procedural with supernatural overtones. Like the opening sequence, the death scenes involving children are handled tastefully, but with diminished impact. Still mourning his own son's murder, Ritter definitely earns our empathy, Cosio's performance exuding the right amounts of anguish and anger. Everyone's favorite modern scream king Tobin Bell is...well, Tobin Bell, providing most of the story exposition in his indubitably creepy fashion.

Ironically, the film becomes less horrific once it's revealed Ol' Scratch is behind everything, at which time Belzebuth employs a lot of the usual genre conventions. The final act – an escape through a tunnel snaking under the U.S.-Mexico border – has its moments, but treads familiar ground and includes some really clumsy CGI. Still, the film is well-made, moves at a brisk pace and offers a nasty shock or two for the stouthearted.