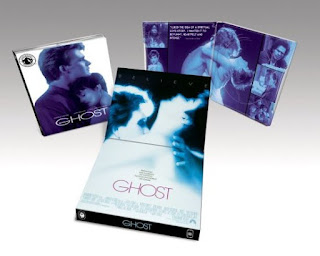 So I was at Dollar Tree the other day and found a movie called The Belko Experiment, a vicious black comedy where a bunch of office workers are trapped in their building and forced to kill each other. The best character is Barry Norris, a office manager willing to sacrifice everyone to save his own skin. He's played by Tony Goldwyn, and if the name doesn't ring a bell, his face surely would. Goldwyn is one of those actors where you go, “Hey, it's that guy!”

Though his filmography is long and varied, Goldwyn excels at playing despicable white-collar douchebags and depicts Norris as a psychotic version of his most famous role, Swayze-slayer Carl Bruner in 1990's Ghost.

For the uninitiated, Ghost wasn't just a box office hit. It was an unexpected cultural phenomenon, making pottery sexy, an old song new again and Demi Moore appealing (sort of). The film also cemented Patrick Swayze as Hollywood's most sensitive hunk and briefly convinced the world Whoopi Goldberg could act. That it was directed by one of the guys responsible for Airplane! was another big surprise.

Revisiting the film for the first time since my wife dragged me kicking and screaming to the theater 30 years ago, I still hold the opinion that Ghost is a bit overpraised and certainly not Oscar-worthy (though it did nab a few, including an inexplicable win for Whoopi). However, it also reminded me how great Goldwyn was. Comparatively speaking, he never got the credit he deserved for creating one of the better unsung bad guys of the decade. One of the chief reasons Sam Wheat is so sympathetic is because Goldwyn makes Bruner a guy we love to hate. Swayze & Moore may have made audiences swoon, but for me, Goldwyn was always the most memorable part of the movie. Or maybe I'm just wired funny.

Ghost is #8 in the Paramount Presents series, consisting of some of the studio’s iconic films. Paramount currently appears to be focusing on the era when they pretty-much dominated the box office with high-concept commercial blockbusters. As such, this one's sort of a no-brainer and is nicely remastered with improved picture and sound. But for me, the niftiest aspect is the packaging, which folds-open to reveal the film’s original poster art. The series is obviously intended for those of us who still take pride in displaying how we've blown our discretionary income.

EXTRA KIBBLES
"FILMMAKER FOCUS” - New interview with director Jerry Zucker.
VINTAGE FEATURETTES (from 2006) - “Ghost Stories: The Making of a Classic” (featuring interviews with Patrick Swayze, Demi Moore, Whoopi Goldberg, Jerry Zucker and screenwriter Bruce Joel Ruben; “Anatomy of a Love Scene” (breakdown of the pottery scene). Based on the subtle comments by a few of those involved, I got the impression Moore & Swayze didn't actually get along very well.
AUDIO COMMENTARY – By Zucker & Ruben
TRAILER
DIGITAL COPY
KITTY CONSENSUS: