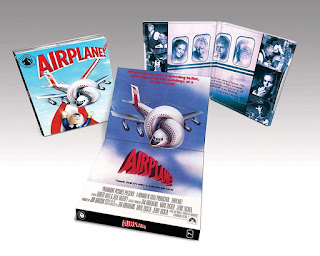 I guess you could call me a frequent flyer. Perhaps some of you are, too, since Airplane! is easily one of the most re-watchable movies ever made.

Like Jaws and Star Wars, it's also one of those movies where you simply had to be there – sitting in a theater during the summer of 1980 – to really appreciate its impact. Today, movie parodies are a dime-a-dozen. Back then, we were caught completely off-guard. There had been plenty of genre satires before, most-notably those purveyed by Mel Brooks, but they were generally presented with a nudge and a wink. Airplane! played it straight, right down to the production design, film score and cast of typically-dramatic actors who didn’t appear to be in on the joke (this was before Leslie Nielsen become synonymous with parody).

Furthermore, it was like an issue of MAD Magazine brought to life. Like that magazine in its prime, the gags, puns and non-sequiturs came so fast and furious, subtle and not-so-subtle, that it was impossible to catch everything with a single viewing. I've seen Airplane! at least two dozen times over the years and almost always catch something new. In fact, while reviewing this disc - #7 in the Paramount Presents series – I noticed one of Airplane's funniest throwaway gags for the very first time. In the early scene where a ground crewman accidentally guides a jumbo jet through a terminal window, one of the people fleeing in panic is a woman who tosses her baby away as she runs.

It's that kind of dedication to detail, gags-within-gags, that still makes Airplane! infinitely re-watchable, despite a few politically-incorrect jokes that wouldn't fly today and satiric references that might be lost on younger audiences. A groundbreaking film, we've been seeing its influence in countless parodies ever since, some good, some not-so-good and most downright shitty. 40 years later, Airplane! flies-high over all of them. No wonder it continues to have so many frequent flyers.

Newly remastered, this disc also boasts more new bonus features than some of the other Paramount Presents releases. The Q&A session, in particular, will be of special interest to fans, where the ZAZ team offers all kinds of amusing anecdotes about the making of the film.

MEE-OW! LIKE TAUNTING A MOUSE TO DEATH.
Posted by D.M. Anderson at 3:24 PM

I'd love an explanation of some satiric references if the mood ever strikes you.

Well, to name a few...the "second cup of coffee" line, Robert Stack riffing on Elliot Ness, scenes/lines which parody classic films, "Win one for the Zipper"and countless disaster movie tropes. Most of these are references to things which younger viewers probably aren't familiar with. Thanks for the feedback!