WHAT SHE SAID: THE ART OF PAULINE KAEL is Aptly Titled 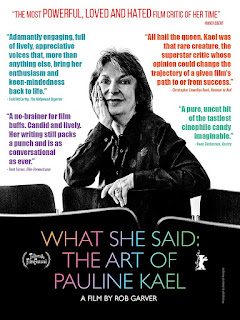 There was never a film critic as influential – and polarizing – as Pauline Kael. Even the mighty Roger Ebert cited her as an inspiration.

She championed Bonnie & Clyde as her peers condemned its violence. Conversely, she mercilessly grilled the likes of 2001: A Space Odyssey and prompted David Lean to question his career choices. She didn't back away from controversy and was never afraid to contradict popular opinion. Though equally loved and hated, even most detractors grudgingly respected her.

What She Said: The Art of Pauline Kael is an affectionate look at her life and career, mostly her tumultuous tenure - to say the least - at The New Yorker. Through new interviews, archival footage and photos, the film reveals just how important Kael's voice was, not only to her readers, but fellow critics and bigwigs in the movie industry (including those who hated her).

Some of Kael's more infamous and controversial writings are given extra attention, such as her humorous lambasting of The Sound of Music (which got her fired from an early job) and a controversial essay on Citizen Kane that suggests screenwriter Herman Mankiewicz deserved most of the credit.

The film is bookended by a charming audio interview given a year before her death and conducted by a child. The questions are simple and Kael's responses are personable and reflective, somewhat contrary to her image. And though she was never in the business itself, Kael was an important part of film history, especially during its sea change in the '60s and '70s. As such, What She Said: The Art of Pauline Kael is aptly titled, very entertaining and highly recommended to anyone with an appreciation for film criticism.

MEE-OW! LIKE BEING TURNED LOOSE IN A BIRD SANCTUARY.
Posted by D.M. Anderson at 12:31 PM