VHYES and the Easy Target 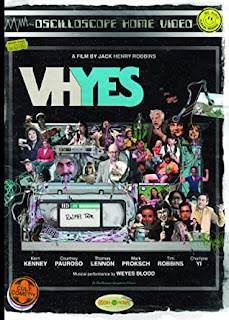 It's 1987, when camcorders were expensive, unwieldy things that required VHS tapes to record weddings or little league ballgames. You could also hook them up to a TV to tape shows or watch what you just filmed. As some folks of a certain age will attest, they were also really fun to play with, even if there was nothing really worth recording.

That's the basic premise of VHYes, which boasts the additional novelty of actually being shot on VHS. With a framing device that has 12-year-old Ralph (Mason McNulty) recording over Mom & Dad's wedding video as he channel surfs, the film serves up a variety of sketches that parody '80s television, mostly locally-produced shows and public access channels. Some of it is very funny, such as “Painting with Joan,” where Kerri Kenney plays a slightly unhinged female version of Bob Ross. Also amusing is Thomas Lennon as an overly-enthusiastic home shopping host.

But like many other sketch-based films, just as many segments fall flat and some are downright interminable, such as one girl's public access talk show featuring local music acts, where the viewer is subjected to the artists' entire performance with no actual punchline. In fact, many of the sketches have no conclusion, as Ralph continuously switches from one channel to another and back again.

Very late in the game, writer-director Jack Henry Robbins (Tim & Susan's kid) decides to tie it all together with something resembling a plot, which probably accounts for the scenes where Ralph is goofing off with the camera, learns his parents' marriage is less-than-blissful and the search for the ghost of a murdered girl. The climax is surreal and ambiguous, suggesting Ralph is losing his grasp on reality. The fact he's also left alone almost nightly tends to undermine the film's playful tone.

I keep saying “film” as though the term applies here. VHYes is shot with the same type of cameras Ralph's using and intentionally edited just as amateurishly. The whole thing looks and plays like an old VHS tape you forgot you had, which is, of course, the whole idea. But a little of this goes a long way and, as a whole, it isn't quite as funny as the decade it makes fun of. While a handful of sketches make VHYes worth watching, the '80s are a pretty easy target.