The Visual Assets of ELVIRA: MISTRESS OF THE DARK 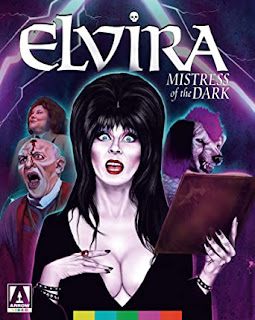 Elvira needs no introduction. Created as a sexy, sassy TV host by Cassandra Peterson, she became an indelible part of '80s pop culture. Even today, she's revered by horror fans worldwide (and still looks pretty damn good, if you ask me).

Back then, everybody got their own movie whether they deserved it or not...Pee-Wee Herman, Fat Boys, Garbage Pail Kids, Ernest P. Worrell, Max Headroom, just to name a few. With her quasi-Valley Girl persona and fabulous physique, throwing Elvira up on the big screen was probably a no-brainer...much like the movie itself.

But it ain't like anyone was expecting The Seventh Seal. Besides, Elvira: Mistress of the Dark delivers exactly as promised: silly slapstick, juvenile humor, eye-rolling puns, innuendo, double-entendres and, of course, the star's considerable visual assets. With a plot so thin it would wisp away if you blew too hard, you're either already in-tune with Elvira's brand of creepy cornball comedy or view the film as a sure sign of the apocalypse.

Wherever you plant your flag, one aspect of the movie is indisputable: As Elvira, Peterson's 'physical' performance is eye-popping (you could even say she provides her own special effects). Sure, the character is a tongue-in-cheek homage to video vamps of the past, but that doesn't really change the fact she's built in all the right places, which the film exploits at every opportunity, most-gratuitously with a climactic Vegas-style song & dance number where Peterson demonstrates her tassel-twirling skills (pushing the PG-13 rating to its limit). And while I wouldn't go as far as to call Peterson a great actor, she is genuinely funny, even when her jokes elicit more groans than giggles.

For this Blu-ray release, Arrow Video has once again included more entertaining extras than films like this usually warrant but fans are grateful for. The best of them is a feature-length retrospective documentary that runs longer than the movie itself, with a slew of interviews and personal anecdotes from the cast & crew. Elvira: Mistress of the Dark is ultimately a goofy product of its time, but as nostalgia trips go, it's still kind of fun if you're in the wrong frame-of-mind.