THE WAR OF THE WORLDS: Look Ma, No Wires! 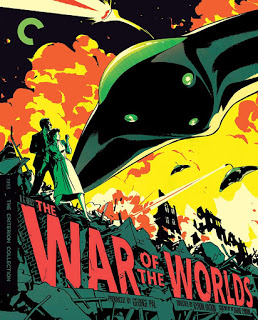 This might be the best restoration of a film I've ever seen.

If not the quintessential alien invasion movie, The War of the Worlds is certainly one of the most influential. Not being around when it was released in 1953, I first saw it on TV as a kid years later on an old hand-me-down black & white. Along with Star Trek reruns, it was my first exposure to pure science-fiction and left an indelible impression.

But aesthetically, time was not kind to the film. Subsequent releases for theaters, home video and TV airings used prints which not-only muted its vibrant color palate, they made the ample use of wires - to move the Martian machines - clearly visible, completely breaking the illusion and erasing the menace. But I didn't know any of this, simply assuming the whole thing was rendered archaic by my bitchin' flat-screen.

Like a lot of beloved classics, it's been given a 4K restoration and – finally! - released on Blu-ray for the first time. While I think 'remastered' and 'restoration' are terms which are sometimes thrown-around a bit too liberally, this time the results are clearly noticeable to anyone who ever grew up watching The War of the Worlds on TV. The film not-only looks gorgeous, its vivid use of color – which I never noticed before – is remarkably similar (at least in terms of enhancing the tone) to The Red Shoes.

But best of all...no wires! Well...almost no wires. Trust me, I've seen the film enough times to know when they're coming. For the most part, they're gone, the result of the painstaking restoration process which is thoroughly discussed in one of the disc's many bonus features (including before & after comparisons). The point is this print renders the film new again, the illusion restored, just like it probably looked in 1953.

Speaking of bonus features, most of them are brand new, as well as a few archival supplements and – of course – Orson Welles' original radio broadcast from 1938, all of which help make this disc from Criterion Collection one of the best Blu-ray releases of the year. Beautifully restored, The War of the Worlds is an essential film for any collection.