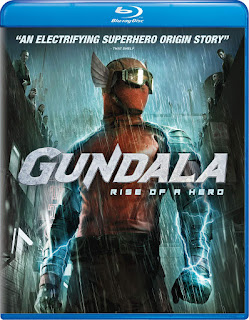 For the uninitiated - like me – Gundala is a popular Indonesian superhero who's been kicking around in comic books since 1969. This film is mostly an origin story, taking its sweet time depicting how young orphaned boy Sancaka (Abimana Aryasatya) becomes a reluctant defender of the working-class against an insidious crimelord and corrupt government.

Sancaka's superpower is enhanced strength, speed and agility whenever he's struck by lightning (which would pretty-much make him worthless on sunny days, but never mind). He's just a lowly factory worker when he discovers his power, and despite being able to take-on a few dozen thugs at a time, he's initially reluctant to get involved with the neighborhood's struggle against crime-boss Pengkor (Bront Palarae) because he doesn't consider himself a hero and getting struck by lightning really sucks.

But Pengkor has an even more sinister agenda...poisoning the city's rice supplies with a virus that will turn pregnant women's newborns into immoral little monsters (seriously). Pengkor's actually a pretty interesting character whose origins are also explained. The son of a mobster, he's orphaned and deformed as a boy, but grows into a ruthlessly cruel crimeboss whose own army consists of equally angry orphans.

I'm getting ahead of myself, though. Most of Gundala is dedicated to Sancaka evolving into a blue collar Batman. A good two-thirds of the movie have passed before he first-dons his makeshift superhero garb, during which time we're bombarded with enough bonkers plot developments for three movies. Still, the action and special effects are decent, while Aryasatya achieves the right balance of determination and vulnerability to make titular hero engaging. The film does grow exhausting after awhile. Even the characters involved in the (anti)climactic brawl appear worn-out from all the fighting.

Par for the course with modern superhero epics, Gundala's franchise intentions are made clear with a coda that teases the next possible chapter. But at least it wraps up its current story fairly neatly. Though unnecessarily long, this is an entertaining enough film to make it worth checking-out by those who can't get enough comic book action (no matter where it hails from).