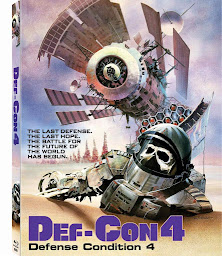 '80s Cult Classic DEF-CON 4 on Blu-ray 9/18
Three astronauts, Tim Choate, Kate Lynch, John Walsch, in a secret spaceship lose all contact with the ground and observe what appears to be a nuclear exchange between the USA and Russia, basically a WW III. Two months later, the spacecraft’s guidance system is mysteriously reprogrammed, forcing the crew’s return to a vastly changed Earth. The spacecraft lands considerably off-course, on a beach in eastern Nova Scotia, Canada and they encounter “terminals” – humans crazed by disease. In the middle of the night, Howe ventures out in search of help and a way to escape. He soon encounters Vinny (Maury Chaykin), a survivalist who has fortified his house with barbed wire and booby-traps. Vinny effectively saves him from the “terminals”, and makes him his prisoner. Eventually, Vinny, fellow survivor J.J. (Lenore Zann), and Howe are captured, and taken in chains to a makeshift fortress built out of junk. In order to survive, the crew must escape to the radiation-free zones while avoiding the cannibal “terminals” and a sadistic military-school student- turned-despotic ruler. And will any of them be able to escape before a malfunctioning nuclear warhead explodes in sixty hours? Hang on tight, DEF-CON 4 is a cult classic that will leave you breathless. 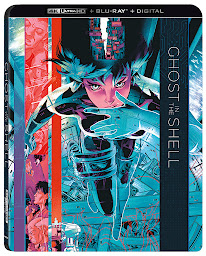 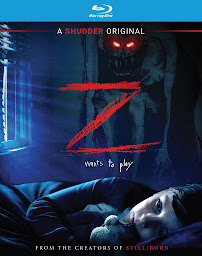 Horror-Thriller 'Z' on Blu-ray DVD & Digital 9/1
Directed by Brandon Christensen (Still/Born) who co-wrote the movie with Colin Minihan (What Keeps You Alive, Grave Encounters), the horror film stars Keegan Connor Tracy (Final Destination 2), Jett Klyne (The Boy), Sean Rogerson (Grave Encounters), Sara Canning (War for the Planet of the Apes), Stephen McHattie (Watchmen), and Chandra West (White Noise). In the film, when Beth’s (Keegan Connor Tracy) son (Jett Klyne) brings home an imaginary friend named “Z,” she becomes concerned that he is falling too deep into a world of make believe. He starts to display extremely destructive behavior, blaming Z for all of his actions. But after he gets kicked out of school, Beth is forced to find a solution. She medicates her son, making him unable to see his imaginary companion. But now Beth sees Z…and he wants to be her friend. 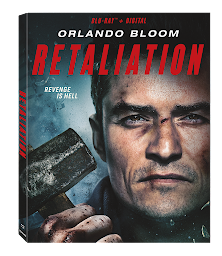 RETALIATION on Blu-ray and DVD 9/8
Orlando Bloom stars as Malky, a demolition worker whose life receives a seismic shock when, out drinking with friends at a local pub, he sees a disturbing figure from his past: the man he holds responsible for a traumatic childhood incident. Fueled by anger, Malky sets out on a path of vengeance—and discovers that no one can escape the consequences of their sins in this taut thriller. Also starring Janet Montgomery (The Space Between Us), Charlie Creed-Miles (TV’s “Peaky Blinders”), and Anne Reid (TV’s “Years and Years”).
--------------------------------------------------------------------

After four years of building the horror label into one of the most recognized in the digital space, genre distributor TERROR FILMS is officially launching their merchandise store! The indie label will be offering a wide variety of goodies from backpacks to leggings. Merchandise will feature demons from their original productions: Trace (2015), The Chosen (2015) and Hell House LLC (2015), appearing on t-shirts, drawstring bags and movie posters. A wide variety of items are available in the TERROR FILMS store, now! TERROR FILMS plans to make many more items available in the future and will be adding new designs and images in the coming months as they continue to work with filmmakers on acquiring merchandise rights; this is something the company has only just begun.
Posted by D.M. Anderson at 3:08 PM