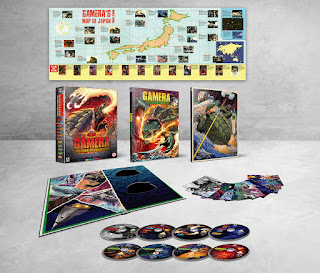 GAMERA: THE COMPLETE COLLECTION Limited Edition Box Set Coming 8/18
The original hero in a half-shell returns! For the first time ever worldwide, all twelve tales of the adventures of everyone's favourite titanic terrapin are collected together in one deluxe Blu-ray boxset. This limited edition collectors' set traces the decades-long evolution of Gamera, from the "friend of all children" in his more light-hearted earlier films, to the Guardian of the Universe in the groundbreaking 1990s reboot series, often hailed as three of the best kaiju films ever made. In addition to hours of new and vintage bonus features, this includes a Hardback 120-page comic book including a full-color reprint of the four-issue Gamera comic series originally released by Dark Horse Comics in 1996, and the first-ever English-language printing of the prequel comic "The Last Hope" by Matt Frank and Joshua Bugosh 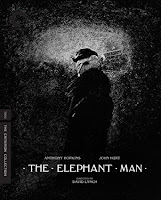 THE ELEPHANT MAN Criterion Collection on Blu-ray 9/29
With this poignant second feature, David Lynch brought his atmospheric visual and sonic palette to a notorious true story set in Victorian England. When the London surgeon Frederick Treves (Anthony Hopkins) meets the freak-show performer John Merrick (John Hurt), who has severe skeletal and soft tissue deformities, he assumes that he must be intellectually disabled as well. As the two men spend more time together, though, Merrick reveals the intelligence, gentle nature, and profound sense of dignity that lie beneath his shocking appearance, and he and Treves develop a friendship. Shot in gorgeous black and white and boasting a stellar supporting cast that includes Anne Bancroft, John Gielgud, and Wendy Hiller, The Elephant Man was nominated for eight Academy Awards, cementing Lynch’s reputation as one of American cinema’s most visionary talents. 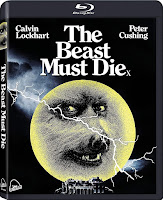 THE BEAST MUST DIE on Blu-ray 8/25
The final horror film from Amicus, upgraded and uncut! In the swansong horror production from 'The Studio That Dripped Blood', Peter Cushing, Calvin Lockhart (COTTON COMES TO HARLEM), Charles Gray (THE DEVIL RIDES OUT), Anton Diffring (CIRCUS OF HORRORS) and Marlene Clark (GANJA & HESS) star in a '70s whodunit like no other. An eccentric millionaire has invited a group of eight colleagues to his island estate to hunt the deadliest game of all - one of the guests is a werewolf, and will be stalked and slaughtered for sport! But who is the lycanthrope, and do they have a shocking plan of their own? Michael Gambon (Dumbledore in the HARRY POTTER movies) co-stars in this "fast-moving and enormously entertaining" (SexGoreMutants) shocker from director Paul Annett ("EastEnders"). Featuring cinematography from Oscar® winner Jack Hildyard (THE BRIDGE ON THE RIVER KWAI) and now fully restored - including the infamous 'Werewolf Break' - from a brand new 4k scan. 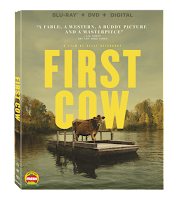 FIRST COW on Blu-ray (plus DVD & Digital) 9/8
Two travelers, on the run from a band of vengeful hunters in the 1820s Northwest, dream of striking it rich — but their tenuous plan to make their fortune on the frontier comes to rely on the secret use of a wealthy businessman’s prized dairy cow. With their scheme landing somewhere between honest ingenuity and pure grift, renowned filmmaker Kelly Reichardt finds a graceful and deeply moving origin story of America in their unlikely friendship and fragile life at the margins. From critically renowned director Kelly Reichardt, the film world premiered at the Telluride Film Festival in August 2019 and screened to great acclaim at the New York Film Festival in September 2019 and the Berlin International Film Festival in February 2020.