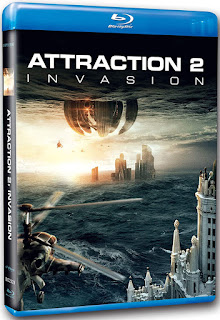 Maybe it's a sign of the times – or I'm just wired funny – but I seem to be finding some kind of social commentary in a lot of movies I've reviewed lately.

I doubt director Fyodor Bondarchuk has such a lofty agenda, not consciously anyway. Attraction 2: Invasion, a sequel to his 2018 film, is another effects-driven sci-fi epic that – like the American blockbusters that obviously inspire him – is more spectacle than statement. However, the 'invasion' aspects of the title involve aliens using our own technology and paranoia against us, as opposed to the tried & true tactic of wasting cities.

If you don't recall the first film, a teenage girl, Yulia (Irina Starshenbaum) fell in love with hunky E.T. Hekon (Rinal Mukhametov), whose ship took out half of Moscow when it was shot down. While her psychotic, soon-to-be-ex-boyfriend Artyom (Alexander Petrov) vowed revenge for the deaths of their friends, she helped Hekon return to his ship. Yulia was seriously wounded in the process, but healed by Hekon, whose technology is based on manipulating water.

Attraction II picks up three years later. Yulia's been somehow “enhanced” by her alien encounter and is now considered a threat by Ra, Hekon's massive mothership hanging-out in Earth's orbit. It's never made clear why she's a threat, but Ra hacks into all Earth's communication satellites to spread false information that she's a terrorist responsible for a recent bombing. Now everybody wants her dead.

It's at this point I was reminded how easily we are collectively manipulated by our own media. We see it on TV or read it online, so it must be true. So what better way to bring down a country than use the media to turn its people against each other? And it's with no small amount of irony that I noted the depiction of a nation being hacked by an enemy force comes from a Russian film. But again, I doubt Bondarchuk was trying to say anything profound. If it was released ten years ago, Attraction II would be just another big, bold slab of epic destruction.

Speaking of which, Ra eventually decides to waste Moscow after all, in a final act where the entire city is threatened by massive flooding from below and above. It's a sequence as visually impressive as the initial ship crash from the first film, giving this one a show-stopping finale. Until then, Attraction II is narratively interesting, even if plausibility and logic are often regulated to the backseat. Most of the original cast returns, including Petrov as jilted-ex Artyom. No longer a standard-issue villain, his newfound moral ambiguity makes him the most interesting character in the film.

My overly-analytical proclivities aside – probably the result of rage-watching the news every morning - Attraction II: Invasion is decent sequel that expands on the original instead of being a simple retread (meaning it helps if you've seen the first one). Whether seen as a statement or a shoot-'em-up, the film is worth checking out.