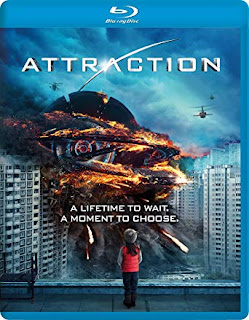 What's the attraction? For one thing, the film starts off with the mother of all crash landings. A benevolent alien spceship, which sort-of resembles a massive Pokeball, gets damaged during a meteor shower and enters Earth's atmosphere. Honoring the time-honored sci-fi tradition of shooting first and asking questions later, the Russian military shoots it down. This results in a long, gloriously-destructive sequence in which the ship plows through the heart of Moscow, flattening buildings and killing hundreds.

This is, by far, the best scene in the entire film. The remainder of Russia's Attraction, while visually impressive, is a bit anti-climactic, not-to-mention derivative of such American classics as The Day the Earth Stood Still and Starman. A group of teenagers, angered by the death of one of their classmates during the crash, want revenge and are determined to take their neighborhood back (no, seriously). Yulia (Irina Starshenbaum) initially leads the revolt with the help of her hunky boyfriend, Artyom (Alexander Petrov) and his buddies. However, after an even hunkier alien, Hekon (Rinal Mukhametov), saves her life, she decides to help him return to his ship, made more difficult by her estranged father (Oleg Menshikov), who also happens to command of the troops that shot it down in the first place.

Attraction is fast moving and watchable enough, with decent performances, good action scenes, impressive production design and spots of humor (both intentional and unintentional). The familiar story, however, is hampered by some terrible writing and needlessly stupid characters. Artyom, for example, turns on-a-dime from helpful hunk to revenge-fueled psychopath, instantly able to jump into bio-mechanical body armor to wage war on the aliens, with the help of a few hundred angry neighbors armed with clubs (Yep...that's how you get rid of beings who've mastered interstellar travel). Speaking of aliens, of course Hekon is young and handsome, complete with prerequisite five o'clock shadow and douchebag hair. How else can Yulia fall hopelessly in love with a guy from another world?

Though the CG-heavy climax descends further into utter predictability than we'd like - Attraction is kind-of fun (even if some of that fun comes at its own expense). We've seen it all before in better movies, but it's nice to see what another country can do with a familiar concept. And if nothing else, the Pokeball crash alone might be worth the price of admission.