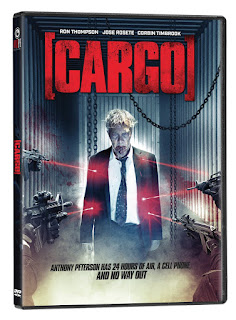 I'm not sure what the brackets around the title are supposed to signify. Perhaps it's to simply distinguish this film from dozens of others called Cargo in iMDB's database. Including brackets in your search does put it at the top of the list.

In this one, Anthony Peterson (Ron Thompson) is a wealthy, unscrupulous man who wakes up in a cargo container with nothing but a cell phone. His mysterious kidnappers call to inform him they also have his wife. If Ron doesn't transfer $10 million dollars to them within 24 hours, they'll rape & kill her and leave him to die in the container. With no idea where he is or who abducted him, Ron scrambles to gather the ransom money, relying on his assistant, Evan, to sell-off assets. This is easier said than done. Not only because he's already borrowed on most of his properties, but Evan is a drug addict whose dangerous lifestyle make him less than reliable (or trustworthy).

Taking place entirely inside within the confines of the container, [Cargo] strives for the same vibe as other single-setting films, like Locke, Buried or the under-appreciated Devil. And sometimes it succeeds. The basic premise is sound and writer-director James Dylan manages to keep it visually interesting...no small feat considering the limited cinematic possibilities inherent in a metal cargo container.

On the other hand, some ridiculous story elements and questionable sound effects - most of the action occurs over the phone - tend to mute the intensity. In fact, Evan's adventures eluding the police are so goofy that we suspect the whole thing is supposed be a black comedy, exacerbated by a grating, bile-spewing performance by Thompson. And since Ron is a self-serving, cold-blooded bastard  right from the get-go, we never care whether he lives or dies.

Still, [Cargo] is mostly watchable, with an effectively ambiguous conclusion. Ultimately, we don't buy any of it - especially Ron's sudden epiphany late in the story - but for a low budget suspense film with one claustrophobic setting and a despicable lout as its sole character, it's a credit to all involved that we feel compelled to see it through.

And who knows? Maybe one of you can tell me what the brackets in the title are supposed to mean.

J.C. Macek III here, producer of [Cargo] and author of the [Cargo] novelization.

I named the film and suggested the brackets to director/ writer/ producer James Dylan.

The brackets are meant to signify a few things First, they represent the "enclosed" nature of the environment (Anthony Peterson's container prison), secondly, this causes the title to look like a "stencil" with overspray, which you often see on the sides of containers. Finally, you hit the nail on the head, as this was intended to diversify the title from other films of its name (although when we started filming there weren't quite so many). I had hoped that including brackets would make it easier to Google.