SGT. STUBBY - AN AMERICAN HERO: Not All Dogs Are Created Equal 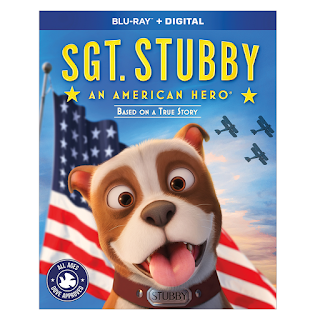 AVAILABLE ON BLU-RAY FROM PARAMOUNT

Comparatively speaking, I have the worst dog ever. While I don't think he actually hates me, he doesn't greet me when I get home, seldom comes when I call and only hangs-out with me when I'm eating pizza. In the face of danger, I seriously doubt he'd have my back like Stubby. If the two of us were ever dropped onto the battlefield, I'm pretty sure he'd immediately go AWOL.

What makes Sgt. Stubby - An American Hero somewhat unique among animated feature films is that it tells a true story without any fantasy embellishment. Other than endowing the title character with decidedly human eyes and expressions, the film doesn't take many artistic liberties.

It's actually quite a remarkable story. Near the end of World War I, a stray dog endears itself to Robert Conroy (Logan Lerman), a young man in basic training in preparation for heading to Europe with his infantry unit. Conroy names him Stubby (because of his tail), whose intelligence and charm makes him the unit's mascot. He also joins Conroy's unit in France, where he demonstrates his loyalty and heroism by saving soldiers' lives and warning locals of poison gas attacks. The story is narrated by Margaret (Helena Bonham Carter), Robert's older sister, from letters he wrote to her while overseas.

Intended for a family audience, Sgt. Stubby obviously dilutes the visceral horrors of war. Still, it tells an engaging story, accurately and effectively depicting historical events from a personal perspective. Stubby himself is cute and charming without ever turning into a cloying caricature. In other words, he acts like a dog. Other than grizzled French soldier Gaston (Gerard Depardieu), whom Robert befriends during battle, the other characters aren't nearly as interesting, though likable enough that we care about their fates.

Still, it's the story that matters most with this one, and Sgt. Stubby presents a relatively forgotten moment in history that will certainly entertain (and educate) its intended audience. Though dramatically slight, the film moves along at a brisk pace and has plenty of congenial charm.

It also makes me wonder what I could have done wrong to deserve the dog I have.

EXTRA KIBBLES
FEATURETTES - "The Making of a Hero" (behind the scenes); "Real to Reel - The True Story of Sgt. Stubby" (the best of the bonus features); "Animating History - The Art of Sgt. Stubby"
IMAGE GALLERY
DIGITAL COPY
KITTY CONSENSUS: