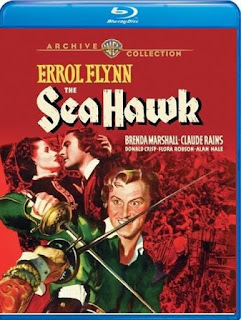 Going out to the movies used to be a different experience.

Today, your $12 ticket gets you more trailers than you have patience for, a Coca-Cola ad and animated M&Ms reminding you to turn off your cell phone. And I get it. Theaters need to pay the bills. But back in my day, as I  often tell my kids, movies were only three bucks and we usually got a double feature. My daughters weren't impressed, both stating that's way too long to sit in a theater. Makes me wonder whose kids I'm really raising.

But even before my day, moviegoers got a cartoon, short subject, newsreel and a trailer or two before the feature. A night at the movies was truly a night at the movies, and in 1940, you got it all for a quarter...without a single asshat whipping out his cellphone. M&Ms were strictly for eatin'.

As a lifelong cinephile, sometimes I think I was born a few decades too late.

Warner Bros. remembers those days, though. In the past, they've released some of their classics as part of their Warner Night at the Movies series (even back in the VHS days), where the feature was preceded by all the aforementioned goodies. One of those movies was the 1940 Errol Flynn adventure, The Sea Hawk. Now on Blu-ray for the first time, the original Warner Night at the Movies presentation is included as a viewing option. For anyone with a fondness for Hollywood history - or are simply curious - it's the only way to experience a film like this.

The movie itself is one of Errol Flynn's best. Released at the height of his popularity, The Sea Hawk is an epic adventure with Flynn as sea captain Geoffrey Thorpe, England's most infamous privateer, defending his country against enemies through piracy. While running afoul of Spain - who are secretly building an armada for an invasion - he falls in love with Dona Maria (Brenda Marshall), the daughter of Spain's unscrupulous ambassador, Don de Cordoba (Claude Rains). At the unofficial behest of Queen Elizabeth (Flora Robson, in a wonderfully playful performance), Flynn plans to raid a Spanish outpost in the New World, stealing their gold to bring back to England. Unfortunately, Sir Burleson (Donald Crisp) betrays the Queen, scheming with de Cordoba to catch Thorpe in the act.

Flynn may not have ever been what anyone considered a great actor, but he had loads of charisma and was always a great physical performer. No one exploited his gifts as effectively as director Michael Curtiz. While the two collaborated on a dozen films together, The Sea Hawk is arguably one of their most ambitious. Capitalizing on the success of Captain Blood, the film ups the ante in terms of scope, spectacle and swordplay. The final showdown between Thorpe and Burleson remains one of the greatest sword fights ever filmed.

Best of all, nearly 80 years later The Sea Hawk is still loads of fun, belying its age with this terrific Blu-ray transfer. And by carrying-over one of the greatest bonus features ever concocted, we can once again experience it just as filmgoers did in 1940, when "a night at the movies" was just that. As classics go, this one is irresistible.

EXTRA KIBBLES
"WARNER NIGHT AT THE MOVIES" - The option to watch The Sea Hawk as presented in theaters, with a cartoon ("Porky's Poor Fish"), newsreel, short subject ("Alice in Movieland") and trailers preceding the feature. Includes an introduction by Leonard Maltin.
FEATURETTE - "The Sea Hawk: Flynn in Action"

MEE-OW! LIKE BEING TURNED LOOSE IN A BIRD SANCTUARY.
Posted by D.M. Anderson at 7:23 PM