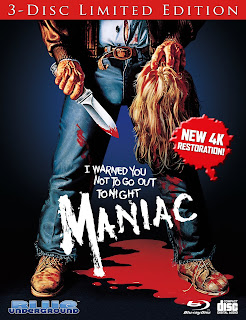 AVAILABLE ON BLU-RAY FROM
BLUE UNDERGROUND

When I was a teenager, I made the mistake of taking a date to see Maniac.

I didn't know anything about it, but this was at the height of the slasher movie craze and they were perfect date-night fodder. Stuff like Friday the 13th and My Bloody Valentine didn't exactly challenge the intellect, but were always good for a few shits & giggles. Best of all, it seemed like a new one popped up at our local tri-plex every other week. By their simplistic nature and teen appeal, slasher movies were a great ice breaker on first dates.

That first date turned out to be our only one. I'm not necessarily blaming the movie, though it certainly didn't help. We didn't laugh, didn't scream, didn't participate by shouting-out at stupid characters. When the movie was over, my date simply wanted to go home and barely spoke in the car. She didn't even kiss me goodnight...a fitting capper to a depressing evening.

Perhaps she wasn't enamored with my sparkling personality to begin with, but I learned the hard way that Maniac is not a good-time slasher movie, certainly not a date movie. In fact, the first 50 minutes - where we follow Frank Zito (Joe Spinell) throughout the grimy streets of New York as he stalks, slaughters and scalps various female victims - are uncomfortably voyeuristic.

The film has since become legendary in cult circles, not just because of its gruesome violence (courtesy of Tom Savini, who outdoes himself here), but the outcry from various film critics and organizations regularly citing Maniac as being representative of everything wrong with modern horror at the time, its depiction of violence towards women, in particular. Public ire was also fueled by one of the more tasteless ad campaigns in recent memory.

Does Maniac deserve its notorious reputation? Well, yes and no.

Revisiting the film on Blu-ray for the first time since it ended that first date earlier than expected, I still found Maniac to be an unnerving experience. But in retrospect, it isn't the violence that continues to make it a challenge to endure. Not merely content to present death sequences from the killer's POV, Maniac forces us into the mind of its titular character. We constantly know what he's thinking, hear his perverse heavy breathing, view the world through his eyes and are distressingly aware of what arouses him to kill. By being dropped head-first into his sordid life, the audience becomes a vicarious accomplice to his acts.

Despite an obvious low budget - or perhaps because of it - Maniac manages to get under your skin. While not particularly scary and even suspenseful, due to the the film's bleak tone and nihilism, aided by the guerrilla style depiction of its drab locations, the singular emotion we consistently feel is dread. Then there's Spinell, who's uncomfortably convincing. Say what you will about the narrative or raw aesthetic of the film, it's really a remarkable performance.

Considering all these elements, Maniac might have done its job a little too well. Not-so-much a slasher film than a demented character study, Frank Zito is a horrifying character because he isn't a masked cartoon like Jason or Michael Myers. He feels...well, real...and we spend 90 grueling minutes inside his head. There's no escaping him until the end credits roll.

Is the film as misogynist as its detractors claim? I'd have to say no. Granted, most of Zito's victims are women and they die horribly, but these are clearly the actions of a diseased mind whose hatred for his dead, abusive mother triggers a compulsion he's unable to control...much like Norman Bates. I'm not suggesting Maniac deserves to be mentioned in the same breath as Psycho. It's still an exploitation film made with profit in-mind. But unlike the Friday the 13th franchise, death isn't presented as a consequence for sexuality. Zito's victims are punished for reminding him of his mother...or simply being in the wrong place at the wrong time. And considering the number of real-life porn stars in supporting roles, it's rather telling that the film has almost no sex or nudity.

Even if all of the graphic violence was removed, Maniac would still be a harrowing experience, and it's for those reasons that the film remains memorable, whether we like it or not. Now a quintessential cult classic, Maniac has lost little of its power to horrify. It's only fitting that the film gets this massive 3-disc Blu-ray restoration from Blue Underground (which Maniac director William Lustig runs, by the way). The film looks and sounds great, maybe even better than the theatrical print I first saw back in the day. Best yet, there's a ton of wonderfully entertaining bonus features - both new and archival - covering all aspects of the film, from its production to its cultural impact. Appropriately, many of the extras pay due respect to the late Joe Spinell, who also wrote and co-produced Maniac, which ended up being the pinnacle of his career. Unlike the tone of the film, the bonus features are fun, light-hearted and, of course, very informative. With a CD of the melancholy soundtrack thrown in, this comprehensive release is a must-own for any fan.

As for the curious...you'll either love or hate it, but you sure won't forget it. Just don't make it a date night movie.