SUSPIRIA on Digital 1/15 and Blu-ray 1/29
Experience Luca Gudagnino’s outrageously twisted re-imagining of Dario Argento’s 1977 horror cult classic that has been called a “grim and glorious work of madness” (IndieWire, David Ehrlich) when Suspiria arrives on Digital January 15 and on Blu-ray™ (plus Digital) January 29 from Lionsgate. Starring Dakota Johnson, Oscar winner and Golden Globe nominee Tilda Swinton (2007, Michael Clayton, *Best Supporting Actress; 2012, We Need to Talk About Kevin, Best Performance by an Actress in a Motion Picture - Drama), Mia Goth, and Chloë Grace Moretz and featuring a mesmerizing haunting score by Thom Yorke, Guadagnino’s directorial follow-up to the Oscar-winning Call Me by Your Name (Best Adapted Screenplay, 2017), written for the screen by David Kajganich, has received incredible critical praise with Variety’s Owen Gleiberman calling it a “lavishly cerebral high-end horror film” and a “divinely demonic spectacle of womanly power.”

FIRST MAN on Digital 1/8 and 4K Ultra HD, Blu-ray and DVD 1/22
Follow the gripping and captivating true story of the first manned mission to the moon in FIRST MAN, arriving on Digital and via the digital movie app MOVIES ANYWHERE on January 8, 2019 and on 4K Ultra HD, Blu-ray, DVD and On Demand on January 22, 2019 from Universal Pictures Home Entertainment. Hailed by critics as “the best movie of the year” (Collider) and “exhilarating” (Entertainment Weekly), FIRST MAN comes from acclaimed Oscar-winning director Damien Chazelle (La La Land, Whiplash) and stars Ryan Gosling (La La Land, The Big Short) as Neil Armstrong and Claire Foy (“The Crown,” Breathe) as Janet Armstrong in the heroic and emotionally driven journey through a pivotal moment in the history of mankind. Receiving two Golden Globe® nominations for Best Supporting Actress (Foy) and Best Original Score (Justin Hurwitz), the critically acclaimed film is packed with bonus features including deleted scenes and special featurettes showing behind-the-scenes looks at creating the film. 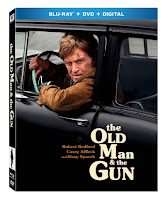 THE OLD MAN AND THE GUN on Digital 1/1 and Blu-ray & DVD 1/15
Academy Award Winners Robert Redford and Sissy Spacek will steal your heart in this Charming comedy about the mostly true story of Forrest Tucker (Redford) – from his daring prison escape at age 70 to an unprecedented string of bank heists that confounded authorities and enchanted the public. Wrapped up in the pursuit are detective John Hunt (Casey Affleck), who is captivated by Forrest’s commitment to his craft, and Jewel (Spacek), the woman loves him despite his criminal ways.
Posted by D.M. Anderson at 1:36 PM