CALL OF THE UNDEAD: Should You Really Answer? 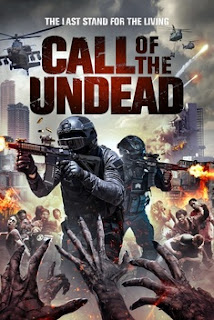 Geez, where do I start?

In the Chinese zombie film, Call of the Undead, a virus begins infecting people in a crime-ridden section of a large city. It's an undiscriminating germ, attacking gangsters and cops alike, who are forced to band together to fight a growing horde of zombies. That's pretty much the entire plot, which we get in the first fifteen minutes. The rest is a slapdash mishmash of poor acting, dumb writing, hyperactive editing, a deafening metal soundtrack, gratuitous nudity and unimpressive zombie mayhem.

Characterization? Well, there's your token American (repeatedly referred to as the Foreigner), a zombie rapist, a female SWAT cop dolled-up like Lara Croft and a repulsive, rotund druglord who gropes his drug-addled strippers (when they aren't busy making out with each other). Everyone else is either a talking head, cannon fodder or sweaty, skimpy sexpot.

Nearly every aesthetic attempt at intensity, horror or sexiness is such an overused cliché that much of this is unintentionally humorous, compounded by the overly serious tone. But the piéce de résistance for bad movie lovers is the atrocious dubbing. Despite scenes of terror or anger displayed by the actual cast, the actors dubbing them are either completely monotone or sound like they're voicing cartoon characters. And they sound more like they're in your living room than part of the movie. Worst (or best) of all, this is the only audio track available on the disc.

But as inept and stupid as it is, the film doesn't appear to be a bargain basement production (though it still looks pretty cheap). Somebody obviously put a few bucks behind this. Unfortunately for them, all they got back from their investment is a hilarious dumpster fire. In that respect, Call of the Undead might be wonderfully endearing for some viewers.