ENTER THE FAT DRAGON and the Running Gag 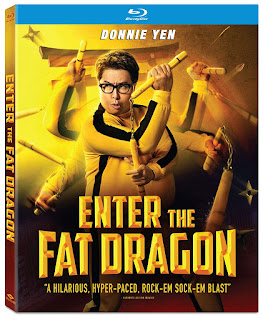 The sole running gag is Donnie Yen in a fat suit.

He plays Hong Kong cop Fallon Zen, who's demoted to the evidence room and dumped by bitchy fiancée Chloe (Niki Chow) on the same day. The subsequent montage has him working a desk while continuously snacking until he's considerably overweight. Then his supervisor offers redemption by ordering him to escort a witness – who has evidence of a drug smuggling operation - to the authorities in Japan. When the witness is killed by Yakuza boss Shimakura (Joey Tee), Fallon teams up with slovenly ex-cop Thor (Wong Jing, who co-directed) to find the evidence, a job made more difficult by corrupt Japanese cops. Worse yet, Fallon's ex is Shimakura's new girlfriend.

Like Sammo Hung's original 1978 film, Enter the Fat Dragon is mostly played for laughs, though the story is quite different. Much of the humor is broad and silly, which is sometimes funny, but just-as-often falls flat. And considering the title, Fallon's weight gain is actually inconsequential. Not that anyone wants a preponderance of fat jokes (especially in this day & age), but at no time does his weight impact the story, action or outcome. Yen kicks, punches, jumps and runs just as deftly here as any straight action film he's ever made...and doesn't even appear sweaty or winded afterwards. Hell, some of us with similar physiques get that way hauling groceries in from the car.

Two things save the film. First, the fight sequences are really impressive, especially a street brawl pitting Fallon against a dozen thugs and the climactic knives-&-nunchucks battle atop a city tower. Second, of course, is Donnie Yen himself. In addition to still-impressive physical abilities, he has a knack for making his characters personable and endearing. Though nearly unrecognizable by make-up, he's once again a charming protagonist. Wish I could say the same about the Chloe character, one of the most obnoxious love interests I've seen in a long time.

Ultimately, Enter the Fat Dragon coasts on the novelty of its funny title and an action star willing to sit in the make-up chair a few more hours each day. Remove both and you still have the same plot, same characters and same jokes, funny or otherwise. The action and its star make the film watchable, though Donnie Yen is flirting with becoming Hong Kong's own Nic Cage.