Dire Consequences in THE ROOM 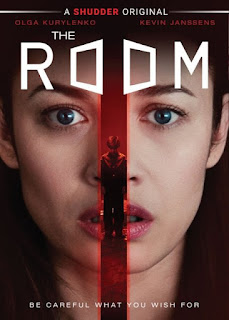 With its unfortunate title, one might mistake The Room for Tommy Wiseau's notorious trainwreck or the Oscar-baiting Debbie-downer from 2015. Furthermore, the synopsis makes the film sound like yet-another knock-off of The Monkey's Paw.

While The Room – which first aired on Shudder - does indeed begin like a variation of W.W. Jacob's classic tale, it takes the concept a few steps further in exploring the dire ramifications of having any wish granted. In the process, the film presents some unique ideas, raises intriguing questions and grows increasingly disturbing as the narrative unfolds.

Kate (Olga Kurylenko) and Matt (Kevin Janssens) move into a dilapidated fixer-upper whose previous owners were murdered. While doing repairs, Matt finds a hidden room and later discovers it can produce anything you ask for. In an amusing montage, the couple are basking in booze, jewelry, expensive clothes, priceless paintings and piles of cash. But things soon turns serious when the narrative reveals the couple had previously tried to get pregnant, suffering two miscarriages. It doesn't take a slide-rule to figure out what they wish for next.

And this is when The Room gets really interesting.

Like any story with the theme of “be careful what you wish for,” there's a catch, which I wouldn't dream of revealing here. But I will say that the previously-murdered couple figures significantly into the story. The movie also explores the psychological impact on Matt & Kate while throwing in some unnerving plot turns. It also raises interesting, discussion-worthy questions...not just over the wonderfully ambiguous denouement, but the morality of the couple's decisions and actions (especially Matt's) throughout the film.

Despite those lofty ideas, The Room never forgets to be a horror film. But rather than relying on cheap scares, it methodically builds dread, coming to a head with a conclusion that might linger with the viewer long after the credits role. A smart film with solid performances and a lot of surprises – even if you have read The Monkey's Paw – this one's a keeper.