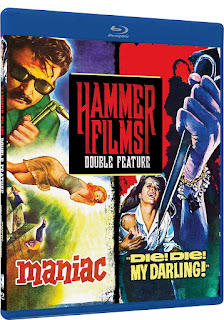 When we think Hammer Films, we generally think vampires, mummies, castles, Christopher Lee and sultry vixens with plunging necklines. But the studio also cranked out a handful of straightforward thrillers during its heyday - well, straightforward for them, anyway - such as the two in this collection.

1963's Maniac begins rather horrifically, with an angry French innkeeper avenging the rape of his daughter, Annette, by blow-torching her attacker to death. He's then committed to an insane asylum for his actions. Four years later, his wife, Eve (Nadia Gray), and Annette are still running the inn when lonely American Jeff (Karwin Matthews) decides to stay for awhile to get-over a recent break-up. He has the hots for Annette but falls in love with Eve, who dupes him to springing her husband from the asylum. That turns out to be a bad idea, but not in a way we're first led to believe.

Maniac plays more like a twisted take on The Postman Always Rings Twice than typical Hammer horror fare. As such, it works pretty well. After a slow start, the complications keep things interesting. The performances are strictly pedestrian, but Maniac makes the most of its low budget with some interesting locations and surprising plot twists.

Before the title became synonymous with The Misfits, Die! Die! My Darling! was best-remembered as Tallulah Bankhead's final film. A decidedly dubious career capper for a screen legend, but Bankhead goes all-in with an over-the-top performance as religious zealot Mrs. Trefole, who imprisons her late son's fiancée, Patricia (Stephanie Powers), forcing her own brand of penance with the help of an equally-loony housekeeping staff.

The film isn't remotely scary or suspenseful, though its camp value is mighty high. Powers makes a bland, irritating protagonist, but Bankhead's scenery-chewing performance ranks right up there with Betty Davis' in Whatever Happened to Baby Jane, making it an amusing entry in the "psycho-biddy" subgenre that was popular at the time. There's also the added bonus of a young Donald Sutherland as a dim-witted groundskeeper.

Obviously, neither film is bursting with originality, but both are mildly entertaining for different reasons. Maniac looks and feels more like the type of Hammer film we're familiar with, and is the better of the two. Die! Die! My Darling! is good for a few morbid chuckles.