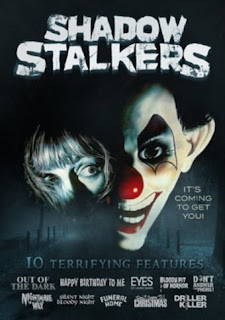 First off, horror fans should be aware that, even though it's listed on the disc menu and summarized on the back cover, Abel Ferrara's notorious cult classic, The Driller Killer is not part of this collection. Instead, the film that plays when you select that title is Drive-In Massacre.

Shadow Stalkers is a scattershot collection of horror flicks featuring a variety of homicidal loonies. Dating as far back as 1965, none of these are classics, but chances are you've heard a of few.


Disc 1 features what are arguably the two most-recognizable titles. Happy Birthday to Me is a derivative Canadian slasher that isn't the best or worst of its kind and has a few memorable death scenes. Eyes of Laura Mars is a flashy Faye Dunaway vehicle probably best-remembered as an early writing credit for John Carpenter. It's fun and stylishly made, but definitely a product of its time and Dunaway's performance hints at the high-camp immortality she'd later achieve with Mommie Dearest. Rounding out the disc is Out of the Dark, which features a clown faced killer targeting phone-sex operators. While it boasts a fairly decent cast (as horror films go), the focus is more on titillation than terror.

Still, all three films are certainly watchable and the transfers are decent. If you're looking to add one or more of these titles to your collection, this is a fairly cheap way to do it.

Discs 2 and 3, however, are almost worthless. The remaining seven movies are cheap disc filler, though the heavily-edited Bloody Pit of Horror remains a far-out hoot worthy of MST3K riffing. But regardless of one's personal assessment of these films - even the worst of them probably have their share of fans - the picture and sound quality is absolutely terrible. A few of them are so poor that it's occasionally difficult to even know what's was happening on screen. Maybe Don't Open Till Christmas is a minor masterpiece, but you wouldn't know it from this transfer.

All of which makes it a shame The Driller Killer is not part of this collection as promised. It's a terrible film, but certainly carved a small niche in horror history with its controversial notoriety. That alone would have made this set more attractive to many hard core horror fans. As it is, keep the first disc and use the others as beverage coasters.