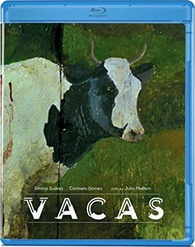 Here there be cows...

In fact, the first shot following the opening credits gives us the eviscerated skull of one unfortunate bovine that apparently picked the wrong place to graze...the middle of a war-torn battlefield.

Thus begins the 40-year saga of the Mendiluze & Iriguibel families, whose cottages are separated by a creepy little forest (where many life altering - sometimes disturbing - events take place). They don't like each other much, a mutual animosity stemming back to that initial battlefield in1875, when Manuel Iriguibel was branded a coward after being responsible for the death of Carmelo Mendiluze.

30 years later, the increasingly loony Manuel spends his days painting pictures of the family cows. His son, Ignacio, is a local hero because of his champion wood-cutting skills, repeatedly defeating Carmelo's angry, unhinged son, Juan. Though married, Ignacio has a relationship with Juan's sister, Catalina, which kinda pisses Juan off because, not only does his hatred run deep, he's attracted to her as well (told you he was unhinged).

We pick up 10 years later, and Catalina has-since given birth to Ignacio's son, Peru, but still lives with her brother. Peru is also sort-of sweet on his half-sister (Ignacio's niece), Cristina, and the two spend much of their days hanging out with Grandpa Manuel, whose bovine art has taken a dark turn. Eventually, fearing her increasingly unstable brother, Catalina flees to the United States with Ignacio and Peru. The final segment of the film has Peru, now an adult news photographer, returning home to cover the escalating Spanish Civil War, once-again seeing his childhood crush, Cristina.

Throughout the years, the one constant is the omnipresence of cows...roaming the Iriguibel farm, lurking in the woods, giving birth, hanging-out while people fornicate, losing their hooves for the sake of art. Are they symbolic metaphors of some greater theme or simply casual observers marking the time? Writer/director Julio Medem sure isn't telling, more content to let us figure it out through his weird characters, eerie atmosphere and imagery that borders on surreal.

But even if the viewer can't make the cow connection (I couldn't, to be honest), Vacas is a strangely intriguing film, which plays more like an anthology film than one with a standard plot. But the overall narrative has interesting peaks and valleys, the film's tone, pace and character focus shifting frequently. Moments of brevity drift into darkness and back again with remarkable ease. A few actors assume multiple roles, yet simply having Carmelo Gomez playing three different characters isn't a gimmick. Though related by blood, they look, speak and behave completely differently from each other.

Vacas is a challenging, almost-unclassifiable film that sometimes takes us down paths we'd rather not travel (there are moments it even resembles a horror movie), then abruptly alters course during the next era of these families' lives, never to revisit the past again. The film isn't for everybody, but those looking for something different might be intrigued. And maybe one of you can explain all these cows. 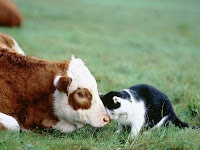 PURR-R-R...LIKE A GOOD SCRATCH BEHIND THE EARS
Posted by D.M. Anderson at 3:29 PM