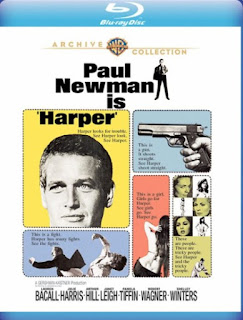 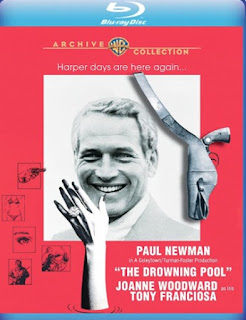 Lew Harper isn't quite down on his luck, though it does seem like his chosen profession isn't a very rewarding way to make a living. As played by Paul Newman in two films made a decade apart, Harper is a private detective in the classic Hollywood tradition: a cynical, world-weary loner who's quick with a quip, doesn't always play well with others and never loses his cool when he gets in over his head.

Harper and The Drowning Pool, on Blu-Ray for the first time, don't bring much to the genre we haven't seen before, but both benefit greatly from Newman's star power and natural charisma. From a historical perspective, watching them back-to-back is an interesting experience, as the style and tone of each is distinctively reflective of the decades from which they sprang.

Harper establishes its titular character right away: Waking up alone in a tiny ramshackle apartment, presumably hung-over as he throws on the same old suit and brews a cup o' joe with a newspaper filter and yesterday's coffee grounds. We've seen it all before, but watching Newman go through a private dick's morning routine is pretty amusing.

Plotwise, Harper is hired by bitchy socialite Elaine Sampson (Lauren Bacall) to locate her missing millionaire husband, who disappeared after returning to L.A. from Vegas. The last person to see him is Sampson's pilot, Allan Taggert (Robert Wagner), who's also the boyfriend of Elaine's flirtatious - and equally bitchy - daughter, Miranda (Pamela Tiffin). Since Sampson's sort-of crazy and an alcoholic, everyone assumes he's shacking up with another woman. But Harper soon suspects something more sinister has happened to him.

Harper encounters a assortment of eccentric characters. Whether they're helping or hindering his investigation, he doesn't fully trust any of 'em...with good reason. In fact, the only one he confides in completely is his estranged soon-to-be-ex wife, Susan (Janet Leigh, in a fairly thankless role).

Harper may be little more than a film-noir footnote today with its standard-issue plot, but it was a big hit at the time. It's the ultimately characters that make the film enjoyable. The fun Newman has with the role is infectious and he's supported by a terrific cast (though changing times have rendered Arthur Hiller's character - hopelessly smitten by Miranda - sorta creepy).

Lew Harper returns nine years later in The Drowning Pool, a belated sequel where the law of diminishing returns definitely applies. It's not a bad film, but other than the presence of Paul Newman, it doesn't really even play like a sequel, with a look and tone more similar to neo-noir movies like Night Moves (released the same year).

This time, Law Harper travels to New Orleans at the behest of old flame Iris Devereaux (Joanna Woodward). Someone is blackmailing her, threatening to expose her infidelity to current husband Mavis. At first, Harper suspects it's the Devereaux's ex-chauffeur, but a deeper plot unfolds after the family matriarch is murdered. It turns out there's an escalating struggle for control of oil-rich land involving corrupt cops and a sadistic tycoon.

Harper's caught in the middle, of course, and Newman slips comfortably back into the character's shoes. But while he's enjoyable, the puzzle pieces in The Drowning Pool don't fit together as neatly - or convincingly - as in Harper. Stuart Rosenberg, who previously teamed with Newman for Cool Hand Luke, is certainly a capable director, but screenwriter William Goldman (who adapted the original) is sorely missed. None of the secondary characters are quite as interesting, and though it was probably a sign of the times, eschewing the comparatively light tone of the first film for a more serious approach was a mistake.

While neither ranks among Newman's all-time classics, both are prime examples of what personality and star power can do to boost a film. His popularity remained the only constant during the decade in-between. But really, what else do you need? Too bad Newman didn't revisit the character one more time, perhaps another decade later. Just as he once returned as an older & wiser Fast Eddie Felson in The Color of Money, the results might have been interesting.
Posted by D.M. Anderson at 12:58 PM