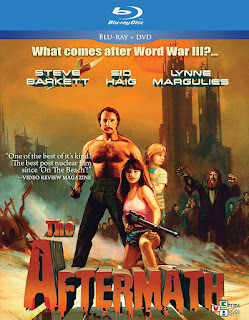 He's the hero of The Aftermath and looks a lot like the guy I recently hired to fix my water heater (complete with overalls). Okay, so he's not exactly Max Rockatansky, but since star Steve Barkett also wrote, produced and directed the thing, he can do whatever the hell he wants...which includes casting his equally untalented kids in supporting roles.

Newman's an astronaut who crash-lands back on Earth, only to discover it's been ravaged by nuclear war, evidenced by a few matte paintings and some abandoned apartment buildings (as well as one pristine mansion where he and a crew member hold up, presumably because Barkett knew someone who let him shoot there). When not fighting paper-mache-masked mutants, Newman squares-off against gangs of bell-bottomed bullies led by Cutter (Sid Haig, the one decent actor in the cast).

One aspect of the film is indisputably great, though. Accompanying the laughable dialogue, ludicrous special effects, low-wattage action and amateur performances is a truly wonderful score by John Morgan. Strongly reminiscent of Bernard Herrmann's classic soundtracks (no accident, either), it seems to belong in another movie entirely, but stands alone as a great piece of music (and probably why the isolated score is one of the disc's bonus features).

While someone should've informed him that real action heroes don't wear fishing hats, Steve Barkett is a man to be admired, or at-least appreciated. Much like Florence Foster Jenkins, he may be completely tone-deaf, but his utter dedication and sincerity as a grassroots auteur gives The Aftermath a level of charm missing from most would-be apocalyptic epics.