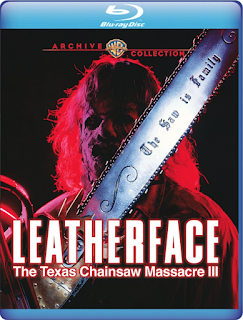 Not to be confused with the recent similarly-titled film (which, by most accounts, is pretty terrible), 1990's Leatherface: The Texas Chainsaw Massacre III is the final chapter of the original franchise. The first one without original writer/director Tobe Hooper, it is also the most maligned.

The original is, of course, a classic and one of the most influential horror movies of all time. Hooper's totally bonkers sequel, The Texas Chainsaw Massacre Part 2, dove head-first into black comedy territory, piling-on the blood & gore he creatively avoided before. Though thoroughly polarizing, it earned a latent cult following. Leatherface, on the other hand, remains the bastard son of the franchise, seldom talked about and largely forgotten.

One reason could be that Leatherface was heavily edited by New Line Cinema (who released the film) to earn an R-rating, leaving a truncated version that de-fanged one of horror's most celebrated psychopaths. Or maybe the world simply never needed a third chapter (one could easily argue we didn't need a second one). But as unnecessary sequels go, Leatherface isn't bad at all. It's worth mentioning that, while I acknowledge its influence on the genre, I was never a massive fan of The Texas Chainsaw Massacre (or Hooper's work in general...sorry). So maybe my expectations were low to begin with.

Leatherface strives for the middle ground between the grimy realism of the original and the lunacy of Part 2. What's impressive is how often it actually succeeds. Title character notwithstanding, it bares no relation to the other films, with a new batch of cannibalistic crazies terrorizing idiotic wayward travelers and Dawn of the Dead's Ken Foree (yay!) thrown-in as a gun-toting survivalist. The film doesn't have any aspirations beyond cheap thrills and journeyman director Jeff Burr doesn't re-invent the wheel here, but he manages to create a fair amount of dread and suspense.

While not particularly gory, Leatherface is still plenty-gruesome, and would-be thrill-seekers will be happy to know that much of the footage that was removed to earn an R rating is included in the bonus features (as well as an alternate ending which, in my opinion, is much more effective). Additionally, part of the fun of revisiting older films (especially horror films) is catching early performances by some of today's A-listers. In this case, a very young Viggo Mortensen shows up to pay the bills - and chew a bit of scenery - as Tex, your not-so-standard local yokel.

Leatherface: The Texas Chainsaw Massacre III isn't a great film, but it's a well-crafted slab of sick-minded sleaze that's certainly more twisted fun than recent movies parading under the franchise banner. This disc from Warner Archive also packs in some great fan-friendly bonus features (from the original DVD release) that show us what the film could have been without studio meddling.

EXTRA KIBBLES
FEATURETTES: "The Saw is Family: The Making of Leatherface"; "We Know What to Do with Them Parts" (Scenes that were deleted to earn an R rating...there are quite a few of them).
ALTERNATE ENDING (they should have gone with this one)
AUDIO COMMENTARY
TRAILER
KITTY CONSENSUS: