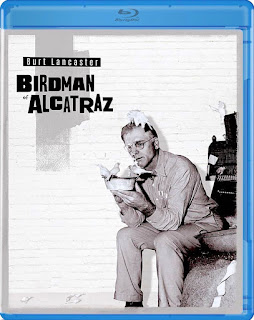 Of the five films Burt Lancaster and director John Frankenheimer did together, this one is probably the most lauded (though Seven Days in May is my personal favorite).

For me, Frankenheimer's best work was during the early-to-mid sixties, when few directors made better use of black & white than he did. As for Lancaster...sure, he could play romantic leads and heroic figures in his sleep, but he was more interesting as a villain or extremely flawed protagonist (and not always playing with a full deck). One could say Birdman of Alcatraz was their first perfect union.

I've often read Birdman of Alcatraz isn't an accurate portrayal of Robert Stroud, the infamous  inmate sentenced to life in solitary confinement who found his calling in life by raising birds and becoming the world's foremost expert. The real Stroud, while quite brilliant, remained violently dangerous his whole life.

Frankly, I don't care about the real Stroud, and I doubt anyone involved in the film's production did either.

Besides, Lancaster doesn't portray the man as a saint. Stroud deserves to be incarcerated and knows it, but his transformation from anti-social egocentric to empathetic caregiver (to both friends & fowl) is the heart that gives this story life. But Lancaster & Frankenheimer aren't all that the film has going for it. The evolution of the adversarial relationship between Stroud and beleaguered prison warden Harvey Shoemaker (Karl Malden) is just as engaging - and important - as Stroud's aviary achievements. So are the few friendships he develops over the years, such as fellow inmate Feto Gomez (Telly Savalas, still with hair) and prison guard Bull Ranson (Neville Brand), the latter of which turns surprisingly poignant.

And that's what we care about. Stroud's life as a bird keeper is merely the catalyst for this inspirational journey. Like the best biographical films, Birdman of Alcatraz wisely picks and chooses facts in order to create a history that serves its own dramatic purposes. Featuring one of Lancaster's best, most-nuanced mid-career performances, the movie is a classic that belongs on every serious fan's shelf. It was released on Blu-Ray before in 2014 as a Twilight Time limited edition with a much steeper price tag. This new release (from Olive Films) is skimpier on bonus features, but the picture & sound quality remain terrific.

MEE-OW! LIKE BEING TURNED LOOSE IN A BIRD SANCTUARY
(OR BOB STROUD'S CELL)
Posted by D.M. Anderson at 9:12 PM