VCI Entertainment unleashes two blasts from the past on Blu-Ray for the first time, perhaps fondly remembered by those who spent the 70s in drive-ins & run-down suburban triplexes. 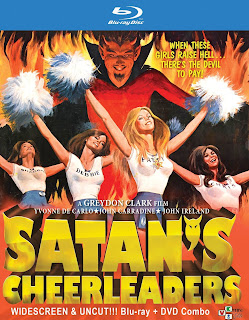 Ignored at the Oscars that year, 1977's Satan's Cheerleaders is a jaw-droppingly inept attempt at comedy and horror in one cheap, gratuitous package. The result is both uproarious and, at times, surprisingly depressing.

Good news first...the dialogue and performances are comedy gold, though not for the reasons the producers intended. The "funny" moments - mostly four nubile teens engaging in such deviant behavior as water balloon fights and sexual innuendo - evoke laughter due to a completely misguided sense of what's actually funny. We're almost embarrassed for the kids forced to utter these lines while trying in vain to look sexy, to say nothing of the older actors paid to appear dumbfounded by these so-called delinquents.

Speaking of the latter, what the hell are the likes of John Ireland, Yvonne De Carlo & John Carradine doing in something like this? That's the depressing part for anyone who recalls the glory days of these once-respected actors. Watching them ham it up as bumbling Satanists (constantly thwarted by a batch of bouncing bimbos) is more sad than funny. Is this all the work they could get at the time?

While changes in our cultural climate over the last 40 years render scenes of old men leering at semi-nude young girls in a locker room kinda repulsive, Satan's Cheerleaders still provides plenty o' fun at its own expense. And believe it or not, the cinematographer of this no-budget hoot is none-other than the great Dean Cundey! I guess everyone had to start somewhere. 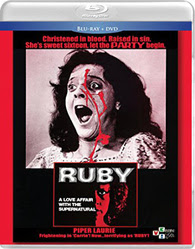 I remember that tagline from Ruby's misleading ad campaign, which helped it ride the coattails of Carrie to box office success. The trailer also ballyhooed star Piper Laurie, fresh-off playing Carrie's psychotic mom. She's the title character in this one, though not the source of terror we were all led to believe.

Instead, Laurie is a former wannabe starlet and the widow of Nicky, a gangster who was murdered sixteen years earlier. She's since opened up a drive-in theater and given work to the rest of the old gang. Ruby isn't a particularly likable lady - she wants to have her mute teenage daughter committed - but she still loves and misses Nicky. Still, you can't keep a good gangster down. Believing Ruby and his gang betrayed him, Nicky begins striking from the grave, killing them one by one.

Back in the day, we may have been initially disappointed at the lack of teens & telepaths, but Ruby is a mildly engaging slab of southern gothic horror. It's definitely hampered by a low budget - check-out the off-screen crash where the burning vehicle is obviously a completely different make & model than the one the character was just driving - but while not particularly scary, the film is atmospheric, making the most of its drive-in/swampland setting. The performances range from enjoyable to awful. Various veteran character actors earn their paychecks (and Laurie is amusingly over-the-top), while the younger cast of no-names would fit right in with the stars of Satan's Cheerleaders.

40 years later, Ruby may not have aged as well as other classic horrors of the 70s, but for those roped into checking it out at their local drive-in back then, it's a nice little nostalgia trip. You might even find it's a bit better than you remember.