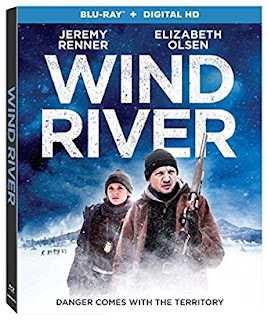 Dealing with the loss of a loved one is always tough. Suffering the loss of a child irreversibly changes you for the rest of your life. There's no getting over it, nothing that erases the pain. All you can do is try your best to live with that permanent hole in your life without letting grief completely consume you (I'm pretty damn certain I couldn't do it).

Not the most uplifting theme for a film, and Wind River doesn't sugarcoat it. Nor does Fish & Wildlife agent Cory Lambert (Jeremy Renner) when talking with his best friend, Martin, whose teenage daughter, Natalie, was just found raped and murdered in the icy hills of the Wind River Indian Reservation. Cory should know; his own daughter died in those same hills a few years earlier under similarly mysterious circumstances. It's also suggested her death was the catalyst that eventually ended his marriage.
Newbie FBI agent Jane Banner (Elizabeth Olson) arrives to investigate and asks Lambert to help out due to his tracking skills. Lambert agrees, perhaps thinking, since he couldn't save his own child, doing so might bring some semblance of closure to his own pain (though his ex-wife thinks otherwise). At first, Natalie's older boyfriend is a suspect, at least until they find his frozen body, beaten to death.

On the surface, Wind River is a simple, atmospheric mystery - the Wyoming mountains practically a character themselves - methodical and deliberately paced. The film takes its time establishing the setting and characters before peeling the plot layers away, including a disturbing flashback of the crime itself.

Wind River is unremittingly bleak almost from the get-go. Given its story and theme, it would be an insult for the film not to be. Renner turns in a terrifically understated performance that conveys his character's quiet desperation, while Graham Greene, as the cynical tribal sheriff, is as close as things come to any kind of levity. Behind the camera, director Taylor Sheridan (who also penned Sicario & Hell or High Water) shows he's more than just a gifted screenwriter. Nearly every shot conveys the somber mood of the entire film.

Ultimately about the devastation of losing a child, Wind River offers no real comfort because, in reality, there isn't any. This isn't what you'd call a good time at the movies. Some of this is really tough going and, despite a satisfying (and bloody) conclusion, never lets the viewer off the hook with a hunky-dory coda. By the time the end credits roll, the viewer is as emotionally exhausted as the main character.

By the way...remind me never to visit Wyoming.